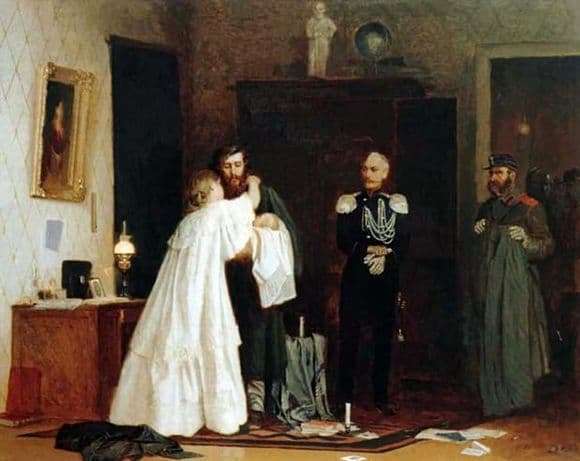 A. N. Shurygin for his short creative work wrote a few works, but each of his paintings is original, and the characters are realistic.

The work “Arrest” reflects not only the essence of the arrest process that was relevant for the troubled period in Russia at that time, but also truly conveys the mood and image of each character in this sad story. In the late nineteenth century, similar scenes often occurred, due to the tense political situation in the country and the development of the revolutionary movement.

The painting depicts the atmosphere of that time. Common household attributes, such as a table, wardrobe and a picture on the wall. There are papers scattered on the floor, apparently the house was being searched.

The artist is very realistic depicted the emotions on the faces of the characters. The endless melancholy and sadness of the arrested does not leave indifferent. His complexion is pale, he guiltily lowered his eyes to the floor. His wife finally clung to him, completely hopeless, putting her hands on his neck. The tragedy of the moment gives the baby in the hands of men.

A tiny child plays a big role in arrest, search and farewell. One gets the feeling that a man is holding not just a child, but hope, a symbol of life and well-being. He understands that he must give it away and leave, but still he wants so much to hope and believe in the best.

The central figure is a high ranking serviceman with a stern look. His face expresses resoluteness and severity, but you can catch a little noticeable melancholy, because his eyes fall towards the arrested.

Few people can remain indifferent to such a sensual scene. Another military officer is devotedly waiting for the prisoner, meekly holding his coat in his hand. On the cabinet is a globe that tells about the high degree of education of the host.

It can be assumed that it was political motives that served as the reason for the arrest. The situation in the room is tense and shows all the complexity and danger of the time.