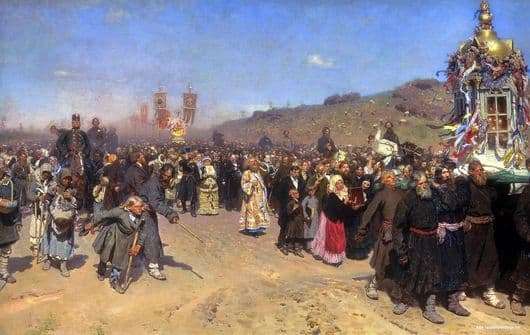 In the picture one can observe a large gathering of people accompanying the procession of the procession in which the miraculous icon is carried to the holy place where it first appeared to the people. But the artist tried to convey not only the procession itself, but to show rural life in Russia, depicting a great many images that saw in this province. From the marching crowd, it is clear that people belong to different segments of the population, among which inequality and powerlessness reigns. In the center of the crowd, a richer estate can be observed, and on the edges of the poor people have joined, who are ousted from the center of the procession by formidable police gendarmes.

You can see how they are mounted on horses, yelling at people, and one of the gendarmes, even swung a whip at the peasant. At the beginning of the whole procession the singers carry a powerful canopy decorated with multi-colored ribbons with a gilded dome. in which the light is visible from the twinkling of candles. After, there is a crowd of burghers and clergymen. In their chapter, you can see two women, humbly bending on an empty icon case from under the miraculous icon. Next comes the red-haired priest waving a censer in his right hand, and with his left one straightening hair from a sweaty forehead. A short distance behind him, you can see an arrogant rich landowner, with greatness carrying an icon in her hands. She fulfills her mission with great seriousness. Charging with her, bowlegged merchant, as if protecting her from the crowd of annoying parishioners.

These characters can be regarded as ridicule of arrogance over simple, poor people deprived in life. A young hunchback on a crutch tries to break through. He strives forward and tries not to notice the village headman, who is trying to push him aside with a stick. His image reflects the spiritual power of faith in healing and impulse. Peering into the crowd, one can snatch out various images, then with an expression of importance, arrogance from the rich, and from the poor – humility and humility. Everything is natural in the picture: a dusty lump in the distance, dirty tatters of clothing and gold vestments, hemp from felled trees, and most importantly individuality in each image.