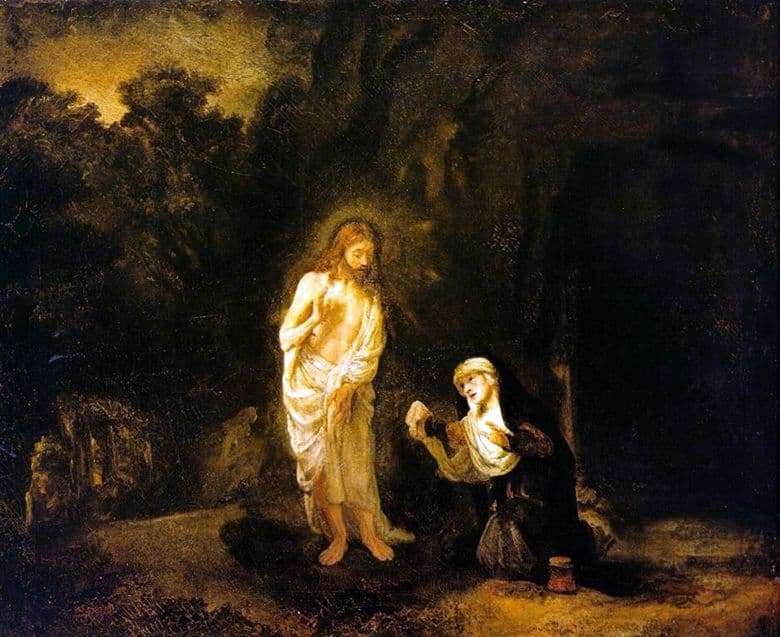 The picture captures the story when Jesus Christ is Mary Magdalene. After the tragic death, no one expected to see the Son of God again, so his appearance caught the girl off guard. According to the style of the author, the background of the picture is significantly darkened. It seems that the action takes place in the night forest, as the trees and the earth have a dark shade.

Only in the left upper part of the cloth one can see the light of the sun, illuminating the tops of the trees with golden glitter. This is associated not only with the dawn, but also with the foreshadowing of a great event, a miracle that descended to earth. It seems that God himself rejoiced at the resurrection of Christ, and thereby illuminated the earth with a golden radiance.

In the central part of the work is Jesus Christ. First of all, the radiance illuminating His figure is striking. With His light He illuminates the face of Mary Magdalen.

The face of Christ expresses tranquility and wisdom. The head is slightly turned towards the woman, while with one hand He holds the tissues covering His body, and with the other, he stops the woman pulling his hands towards him. Mary Magdalena fell on her knees in front of the Son of the Lord, and her face, richly lit, conveys a mass of feelings that engulfed a woman from the sudden appearance of Christ: this is surprise, delight, happiness and worship of the Holy One.

Maria is dressed in dark clothes, but a light white cloth covers her hair, dropping to the neck. In a fit of emotions and warm feelings, she pulls her hands to Christ, wanting to touch him, as if saying: “Isn’t this a dream? Are you here?” for I have not yet ascended to My Father. ” The canvas conveys the infinite joy of Magdalena from the appearance of the Holy One, His immaculate calm and kindness. The abundance of light in the central part of the picture speaks of a miracle that suddenly occurred after the tragic events.