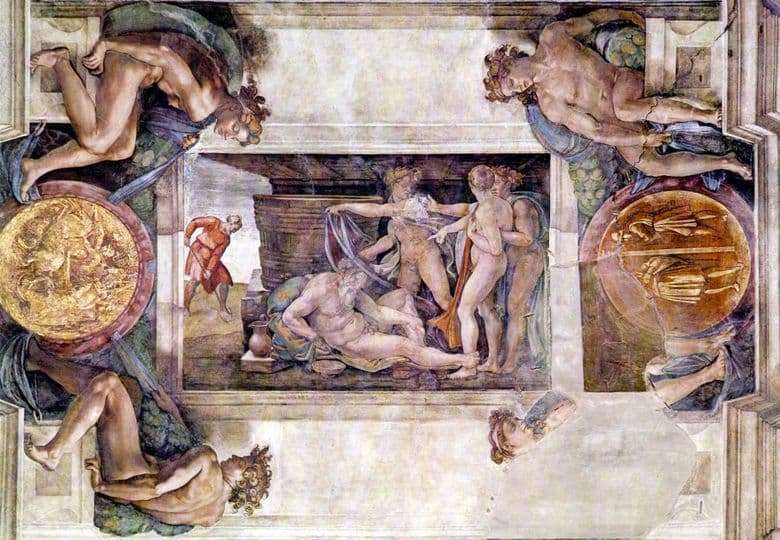 The first from the entrance to the chapel we will see the composition “Noah’s intoxication”. When Michelangelo worked on the Sistine Chapel, he neglected the sequence. This composition was to go immediately after the “Flood”. However, the author decided to act in his own way, and the visitor to the chapel first sees “Noah’s Drunkenness.” Incoming sees Noah, who is asleep, and his son ridicules near him.

In the center we see naked Noah, who lies down to rest. Ham, who stands, turned away from the viewer, points his finger at his father. The viewer sees that Michelangelo decided to show the sin of Ham, who dared to laugh at his naked drunk father.

The picture occupies almost all the dark room, which is located under the roof. On the left we can see a small gap in the depth of the room, which sparkles with silver hues. The artist wrote Noah guided by the principle of opposing movements. We can see that the hero stretched his right leg, bent his left leg in his knee, lifting it while the main character stretched his left hand and bent the other hand, as if creating an additional fulcrum for his naked torso. His three sons have light figures that are clearly visible on a dark background. On opposing the son figures, Noah has not a lifeless, although senseless body. The sons, on the other hand, are gesticulating animatedly, as if talking to each other. We also see an old man in bright red clothes who digs the ground with a shovel.

According to the biblical legend, Noah’s three sons, Shem, Japheth, and Ham, went down with the father of the ark. Their father became a farmer – cultivating the land, he planted a vineyard. Having randomly received wine, after drinking it a little, he got drunk and fell asleep. Ham saw the sleeping drunk father. He immediately ran to the brothers to tell them what they had seen. They covered their father with clothes. Noah, in response, cursed him. The eldest and middle son got the blessing of the father and the prediction that the eldest son in the family would always have real faith, and the children of the middle brother would take the faith from the older children.

All of Noah’s predictions have come true.