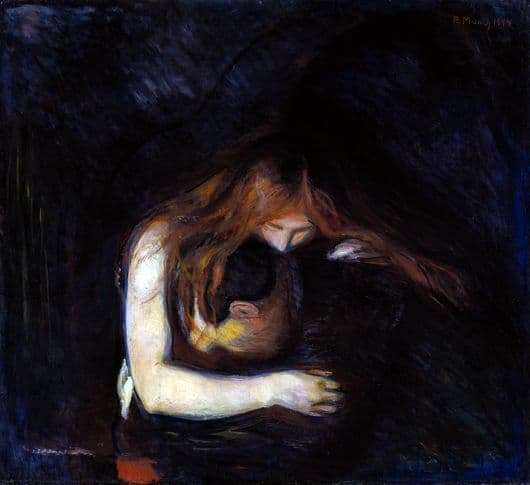 Creepy canvas. According to the degree of fear, it is even worse than the other work of Munch – “Scream”. There, the horror in the face and the silent scream from the canvas makes you close your ears and feel uncomfortable. And here…

There is more than an unpleasant situation. And not a kiss, and not an act of violence, but something incomprehensible, but desperate and sorrowful.

The history of this canvas is a bit strange. The artist came to visit his colleague and found him squatting in front of a half-naked woman and put her head on her knees. And she just bent over him and at the same time her hair seemed to envelop the man from above. The feeling that this blood was shedding was due to the color of the hair – fiery red. Munch froze on the threshold, and then whispered to them: “Stop! I will paint! And soon, in an hour and a half, the “Vampire” canvas appeared. Although in fact it was love, tenderness. But Munch himself perceived love as a vampire, as something evil and alien to him. He hated that feeling.

The reasons for this alienation were hidden under his personality. In general, he was strange for that time and it seems even now he would hardly have been understandable. Almost all his canvases are dark, ominously warning of something evil and unpleasant. Here and here, without particularly trying to cover up something beautiful, he makes the background darkly black, the faces mysteriously strange and almost invisible to us. Terribly, but a rational person is calmer, can distinguish hair from blood flow, a gentle kiss on the neck from a vampire bite on the neck. Most likely, then, frozen in these positions, they both talked. This did not interfere with Munch, he just worked and no feelings could cloud him.

Munch remained for us, ordinary citizens, a mystery, which has not been revealed until now. His strange paintings have long been highly appreciated not only by art historians, but also by rich collectors of collections.