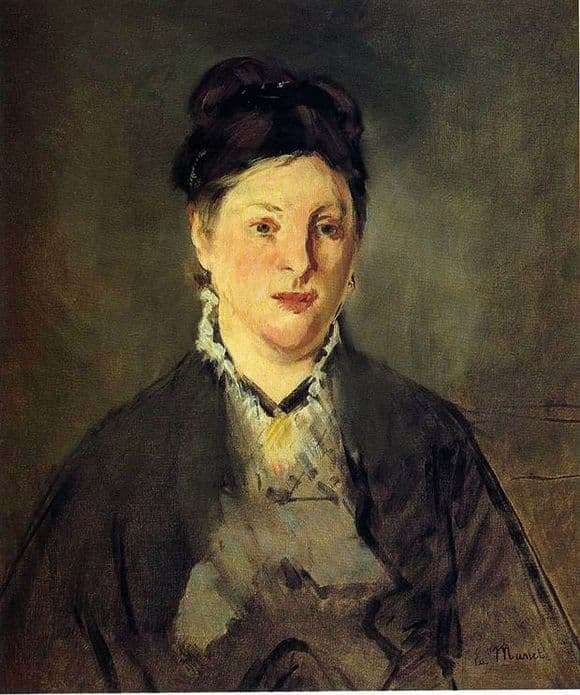 Edouard Manet – a painter from the capital of France, who worked in the XIX century and became in those years the recognized ancestor of the new trend in art – impressionism. In the period of mature creativity in 1870, the artist wrote a portrait of his wife – “Susanna”. In general, for all her life several paintings were devoted to her. But this portrait stands out for its special mastery of the brush, close-up and innovation of style.

Suzanne Leenhoff was familiar to the painter from early youth. They recognized each other during the visits of the girl to the house of Mans for teaching music lessons in 1849. The young pianist was two years older than the artist. The fruit of the emerging relationship after 3 years was the son – Leon. The lovers had to hide their connection to the public. The couple married only in 1863.

Edward early showed craving for drawing. As often happens, parents at first did not support their son. But after unsuccessful attempts to study at a navigator and successful artistic sketches brought from the journey, Father Manet surrendered. In order not to destroy the talent of the academic, the novice master went to study the subtleties of painting in the studio Couture. But it was not possible to avoid the pressure of academic traditions with a private teacher.

Edward looked into the future, craved creative experimentation and freedom from the rules of classicism. Frequent disagreements with the teacher provoked the cessation of lessons. Mane went into free swimming, for which he later “paid for” world fame.

The portrait of “Suzanne” is made remarkably thin. All attention and all the light given to the face of the heroine. The background is devoid of objectivity, is a dark gray background. The outlines of the upper torso of the model are written in the style of pencil sketches, they are also gray and inconspicuous. Only a whitening collar neatly frames his wife’s face. Her gaze is calm, thoughtful, and in the very eyes – the seal of the mysterious living soul of a woman.