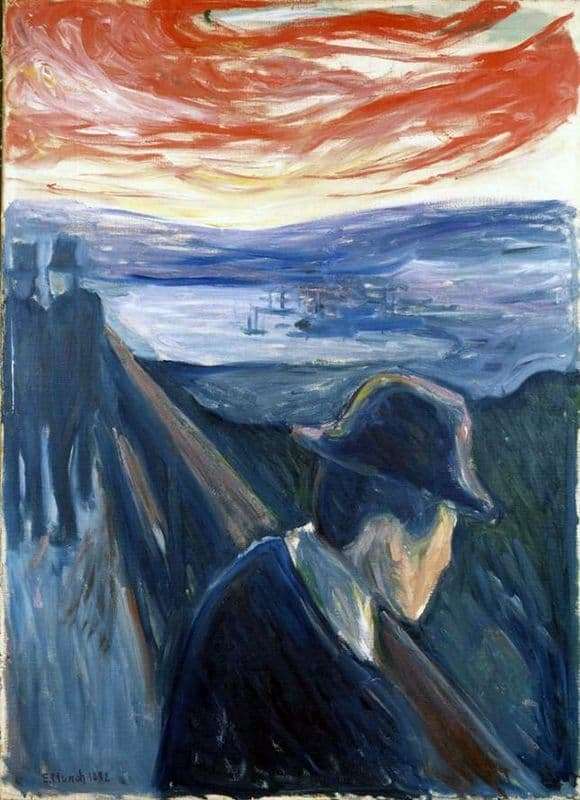 The famous expressionist Edvard Munch was among the first artists who discovered a new direction. Expressionism was a current, the main idea of ​​which was artistic means to express strong emotional experiences.

Many connoisseurs of art call the painting “The Scream” the apogee of Munch’s work. The creation of the Norwegian painter, which received phenomenal popularity, belongs to a series of similar works. Among them is the work “Despair” in 1892.

The author made a written mark to the picture. In it, he describes one episode during a walk. He was in company with two companions. The time was nearing evening, the sun was setting, and the sky was glowing with scarlet colors. This color impressed the artist; he looked blood red to him. Munch felt an attack of melancholy. He leaned against the fence on the bridge. Friends were not involved in the sudden illumination of a stopped friend. They went on their way together, fascinated by conversation.

We see the described plot in “Despair”. A lonely man with a hat in the foreground looks at the abyss with sadness and fatigue. In the distance you can see the fjord, pier and city buildings. Above the ground, a red flame is painted over the sky. Two more characters stand a distance, faceless and indifferent.

The mood of Munch’s paintings changes from fear to jealousy, from melancholy to despair and cry. The gloomy perception of the world is reflected in hundreds of paintings by the painter. The emotions of human grief and pessimism deserve close attention. The author reflects them on canvas with contrasting colors and smooth strokes. Despite the lack of clear features on the faces of his characters, they still have strong emotions. This is the master’s genius and his originality.

The painting “Despair” is born of a deep sense of loneliness, hopelessness and humility before the tragic outcome of life.