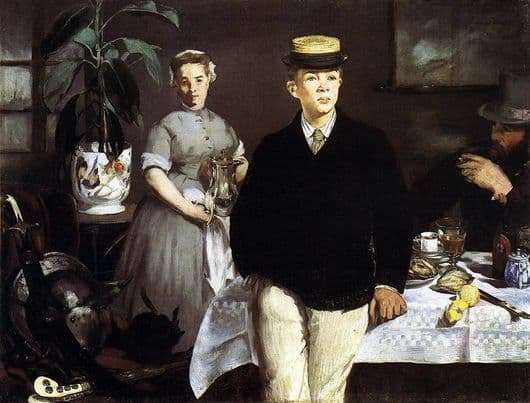 The painting “Breakfast in the Studio” is atypical enough for the creative work of the founder of impressionism, Manet. This is a mixture of genres – portrait, still life and typical household plot.

In the center of the picture – a young man, casually leaning on the table with the remnants of breakfast. This is Leon, a relative of his wife Mane. The absent look of a young man is directed away into the distance. To his left is a maid with a silver jug ​​of coffee, to the right is a man with a hat and a cigarette.

The left part of the picture is occupied by the artist’s traditional props – weapons. There you can also see some hint of dynamism – a black cat.

For the first time the picture was exhibited in 1869 at the Salon. Critics apprehended him with a certain perplexity – they could not imagine how a sword, a cat and a woman with a coffee pot could be combined

in one picture. Ultimately, the picture was perceived quite favorably – all incompatible objects take their place, creating a harmonious composition.

In the picture you can see borrowing from other artists – Velázquez, Chardin, Vermeer. So, the woman with the coffee pot and the wall frame are most likely taken from Vermeer, and the knife lying on the table is from Chardin.

The uniqueness of the picture is that the artist does not detain attention on one subject. For him, Leon and the woman with the coffee pot and the lemon on the table are equivalent. By bringing together a person and still life, Manet gets new opportunities for further experiments. Creating this canvas, the artist proves that the composition of the picture is determined not so much by the plot, as by a certain set of graphic tools.

All three characters in the picture are kept apart. They do not communicate with each other, they have absolutely nothing in common. These are the same different pieces of furniture, like a sword and a black cat lying next to it.

The picture is a natural continuation and addition to the famous “Breakfast on the grass.”