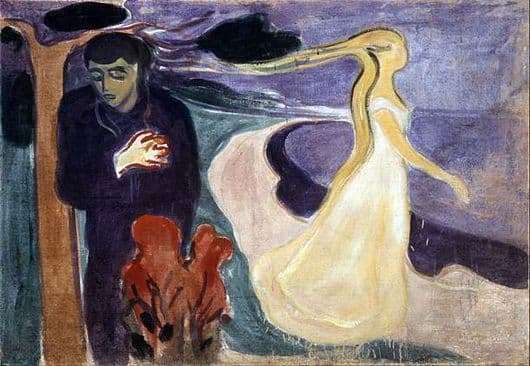 Strange was this artist, some kind of mystic. And it would be ok if he was just a mystic, but his canvases also have some kind of mysticism. Only the painting “Scream” can in no way leave alone many generations of art lovers. The “cry” is then stolen, then the vandals spoil the canvas, then it gets dusty in the archives for a long time, then the visitors who are sick on their heads in ecstasy beat for hours at the canvas. Practically, the same thing happens with this canvas – “Parting”.

On the canvas two. One is female, the second is male. And on the canvas just the very moment when the girl apparently refused him feelings. Probably not loved, but he loved. And this failure for him is equal to death. The painter showed it with paints. The girl is all bright, light and faceless. But the guy is gloomy, his face is gray and his heart is holding tightly, which is shedding blood. The separation is painful for him, but she does not even suffer. This happens often.

The artist did not just describe this story, he described it as his own. But he also happened this way, when he loved, he was not loved. Not soon the guy, like Munch once, will come to his senses. And it’s not at all soon that he will again believe in love. The artist in his time never returned faith in love. Hobbies were, but there was no true love as it was.

Love is a crazy feeling that burns people from the inside. And only those who live in life easily never think about feelings. This life is really easy, but lonely. By the way, they sow this very loneliness wherever they can. Suffer from this love.

Here is the great Edvard Munch and depicted it – a desperate pain because of the separation, which the young man received from one windy girl. He portrayed the fact that even in our time, fans of his work come to despair and admire his canvas in ecstasy of delight.