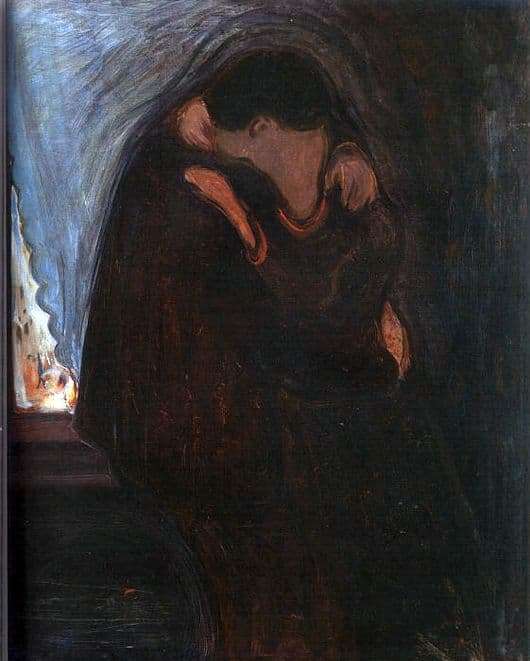 The painting “Kiss” was painted by Edward Munk in 1897. Like all the work of the scandalous artist, this also creates a dual impression. On the one hand, she looks gloomy, repulsive and negative, despite the fact that she has a kiss. On the other hand, I want to look at the picture and look, gradually revealing all its facets, all its secrets and secrets.

The plot of the picture is as follows: a couple in love, hiding behind a thin curtain, enjoys a kiss in the light of sevens, forgetting about everything in the world. Despite the fact that the situation is considered extremely piquant, Munch very delicately conveyed all the sensations. With the help of the distortion of space, he slightly modified the passion and intensity that were supposed to come from electric waves from lovers.

Despite the relatively poor color scheme, the artist gave paint some details. For example, the prominent details of women’s orange clothes not only increase the temperament of the picture, but also create a kind of fleur, mystery and even fantasy around the pair.

But the main idea of ​​Edward Munch was to strip the figures of contours and faces. Despite this, he managed to give them plasticity and grace. The absence of faces is the coding of information about the characters themselves. The most important thing is their experiences, emotions, feelings, and not social status or any features of their faces or figures. After all, love must exist exclusively on a spiritual level.

Another detail of the picture – the silhouette of a man who is visible through a small window. Edward Munch, as it were, separates with the help of a curtain real humanity and a faceless, empty society. Here, only the passions are important, in the end, the kiss itself, and everything else that is behind this little square of the room is silly, insignificant and worth nothing.