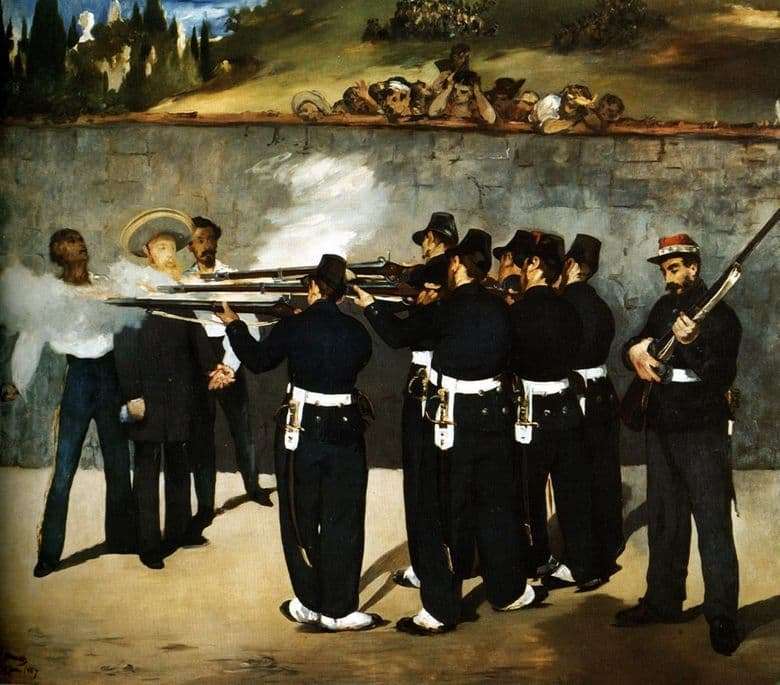 Edward Mane was born in a wealthy family – his father was the head of the department of the Ministry of Justice, his mother – the daughter of a diplomat. The boy’s father was categorically against art education for his son. The first lecture on painting paid uncle Edward. At the insistence of his father, Manet twice entered the Naval School and twice failed examinations. By this time, the whole family of the young artist already understood that his vocation was canvas and brushes. However, Manet’s career was not easy, and practically throughout its entire length he was confronted with a lack of understanding both among critics and ordinary viewers. The master’s commitment to nude and at all repeatedly became the cause of scandals – the Paris Salon considered his work obscene.

The painting “The Shooting of Emperor Maximilian” depicts a complex, transitional moment in the history of Mexico. Maximilian received the title of emperor during the seizure of Mexican lands by the French. However, the country’s armed forces remained loyal to the true Mexican President, Benito Juarez, and did not want to obey a stranger from Europe. Maximilian was captured and shot.

Edouard Manet was actively interested in politics, and this event made a deep impression on him. There are several author’s versions of the picture, the most famous is stored in Mannheim. The military in this picture is dressed in a standard field uniform, common not only in Mexico, but also in many other countries. Next to Maximilian are two loyal generals. The sombrero on the head of the emperor rests on the crown itself, which creates two interesting and very bright symbols. First, the hat seems to have been chosen not in size and is just about ready to fly off, which hints at the ineffective and truly disastrous rule of Maximilian, who absolutely did not understand the Mexican people.

Secondly, thanks to the gold border, the sombrero resembles a nimbus of a martyr, the halo of a saint. Onlookers are watching the execution from behind the fence. Overall, the picture seems rather calm, what caused the critique of the canvas and government censorship. Due to detachment and ambiguity, it was forbidden to show the picture publicly.