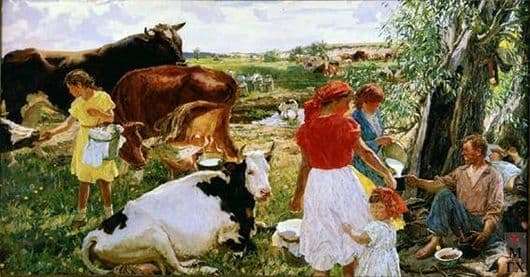 The picture was painted by the artist in the fifties of the last century. It depicts nature in the colors of a summer day. The canvas shows not only the sun and warmth, but also an excellent time to gather the forest harvest: berries, mushrooms. In the foreground of the picture, the author portrayed a girl and a woman who, exhausted from the heat, settled down to rest under the birch trees.

The woman fell asleep for a while in the coolness of the shadow, hiding behind her hand. And the girl sits, stretching out her legs in front of her, on which she placed a small mug of water poured from a jug. She is wearing a simple peasant dress, her head is tied with a kerchief. Next to the girl and woman are two filled baskets of mushrooms. The green, high, zapashisty and juicy grass serves as their greenhouse for rest. Two weeping birches bowed their branches over their heads, covering them from the hot and sultry day.

In the depth of the canvas one can see how a bright and burning sun shines in the meadow. The whole picture is filled with light, and the sun’s rays, the green of summer, the shade of birches evoke a good and good mood. The girl, most likely, sadly thinks about the upcoming way home and she does not want to leave this amazing glade filled with flowers and birds singing. And at the same time, she is very glad that she was such a good helper to her mother, because together they managed to collect a lot of mushrooms that will be used for winter supplies.

Her reddish, black-burned dog is quietly sitting beside the girl. He, too, was tired and lay down to rest, putting his head on his front paws with his ears hanging and his eyes closed. He was a faithful traveler and guarded them in the forest.

The whole picture is filled with silence, kindness and peace, which leave the viewer with the most positive and remarkable impression from what he saw. Involuntarily most want to look at the meadow, sit on the green grass and breathe the smell of summer forest.