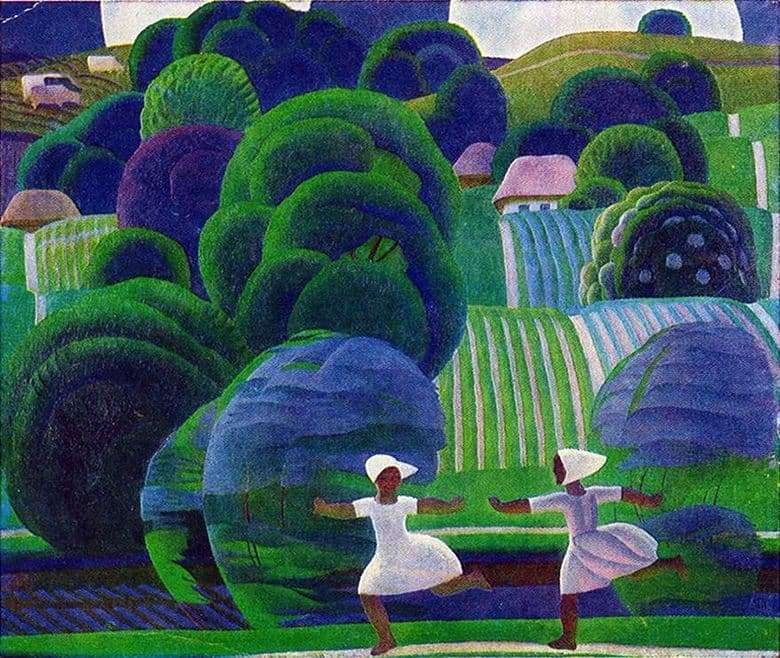 Creative way Tatiana successfully started in Kiev in the prewar years, but has been completely interrupted evacuation and continued only in 1944. Five years later, she created the famous painting “Bread”, became famous for her all over the Soviet Union. At that time it was the main style of socialist realism, which is especially evident after the summer spent with the students of the Kiev Institute of Art, where she taught in the farm. Later in this and other paintings of the 1960s. It affected her vision synthetism – an offshoot of Impressionism, Pointillism contrast, when the image is simplified, is more decorative, consisting of planes and figures glowing colors that express a generalized “memory” and the impressions of the author.

The canvas depicts the Ukrainian hinterland, which is noticeable through the characteristic thatched roofs and bleached walls of houses, hiding on a hill dazzling with vegetable gardens and meadows. In the foreground in fluttering white and bluish-pink dresses run two girls with kerchiefs recognizable for the USSR on their heads. The wind weaves their skirts, rustles in the shining blue-green foliage of trees on the bank of the river. In the perspective of the viewer, the group of rounded vegetation growing at the left edge of the canvas, which shimmers as it moves away, shimmers in a variety of shades of green from ultramarine and fern to jade, and the shadows become blue-black, sapphire and even purple.

The creation literally breathes movement and glows with rich summer colors with which the artist painted an ordinary rural landscape. In her eyes, he looks so original, even a little futuristic, due to moon and dark blue spots on the narrow horizon at the top.