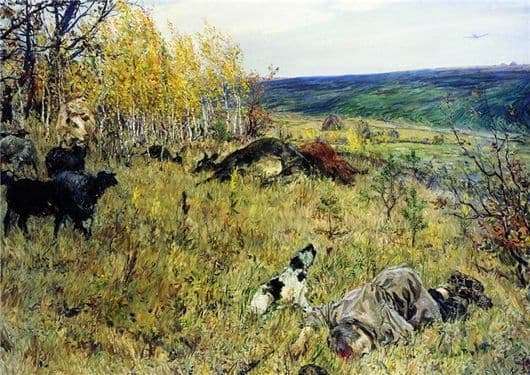 Autumn day. On young birches yellow, with a golden sheen, leaves. Yellowed grass has already covered the ground. At the edge of the forest graze the flock, the little shepherd boy. But suddenly a Nazi plane flew by, sent the car to the ground, he brutally fired from his machine gun.

The boy fell to the ground, buried in the unmowed grass with his head, being in an unnatural pose. The bullet hit him right in the head. He pressed his cheek to the dry grass, firmly pressed to the cold ground. His arm is turned. Shepherd’s cap and whip, lie to the side. Near the boy, on his hind legs is a dog. She howls long and sadly, cutting the silence of the steppe with her cry.

This is a howl of unfulfilled hopes and the broken life of his friend.

Just a moment ago, his life was stopped by a lead shower of bullets. Fascist aircraft is seen flying over a field of winter crops. He gradually disappears into the distance of a clear and clear sky, screaming about a peaceful life. The artist portrayed him as a small one, making it clear that he was an outsider in these parts.

The herd with the animals fled from the shooting, but it begins to converge with its shepherd. The fascist bullet touched two cows and a calf lying among the birches. Sheep, lostly wandering around her cowgirl. Against the backdrop of a peaceful autumn nature, the committed crime looks cruel and monstrous.

The layers did not accidentally choose the autumn period, which sets off its sad beauty, the tragic events of the death of the little shepherdess. The described nature is perceived by the viewer as a lyrical accompaniment to a sad, sad song filled with deep tragedy.

Looking at the picture, the tears roll and fists clench. Hatred and anger is born to the fascist haters. One feels pain and resentment for the life of a little boy who has broken off. This plot of the picture is hard to forget. The picture is filled with silence, among which drama of war is cut through.