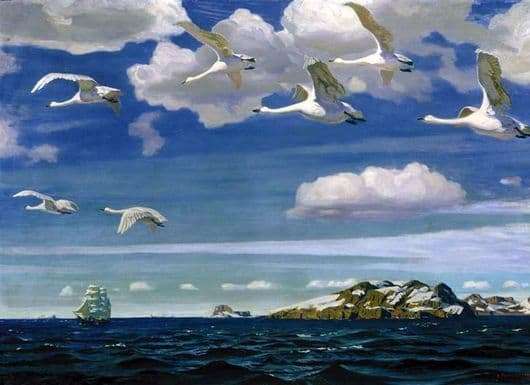 Painting A. A. Rylova “In the blue expanse” – a kind of result of the search for the artist. The findings of past years are guessed in it: the epic of “Green Noise” is readable and at the same time there is drama that we know from “Swans over the Kama”. Only here the birds look different. In their calm, majestic flight, there are no signs of a struggle that was characteristic of portraying artists of the early Soviet period.

Peace and serenity is felt in the azure of the sky and the sea. White birds with huge wings fly easily and freely, as if swimming in the warm rays of the sun. White clouds of cumulus clouds are also undisturbed. Next are the cirrus clouds, which form a line of general direction of motion. Below are the waves. Their fluttering is light and carefree, and a sailing boat glides over them. He himself, like a bird, seems to barely touch the water, soars above it.

The spectator is so drawn down by this silent, incredibly light movement in the azure sun-filled, that he feels himself on a big ship, smoothly moving towards the rocks towards the sailboat. In the picture, the movement takes place from right to left along the Katrina plane. However, the flat image is not perceived due to the play of colors of the sky. The lower the sky, the deeper the blueness, and to the horizon line, it completely takes on greenish hues. And next to the brownish rocks, turquoise sky tones flash. They are contrasted with purple shadows on the clouds and wings of powerful birds. The flight of the swans is calm, measured, as if soon they will return to their native shores.

This picture can be attributed to the classical painting genre. At the same time, it is imbued with romance, which means that it can also be considered symbolic. In this case, its central idea should be appeasement, if not the state of peace and creation, which, finally, should come after all the upheavals that took place in those years in the country.

In fact, the canvas depicts the world to which the intelligentsia who recognized the revolution was striving. Similar plans can be seen in the works of the early Soviet cinema. That idea of ​​a brighter future, to which we were so eager then, was expressed in many works of Soviet art, and one of the most worthy masterpieces of that era can be called A. A. Rylova “In the blue expanse.”