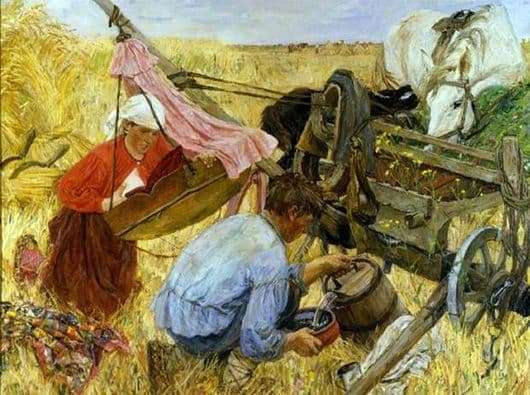 Soviet painter was born in the Ulyanovsk region, in 1893. He took over his talent from his grandfather – icon painter.

After studying at the seminary, Plastov leaves for Moscow to receive an art education. When the revolution began, he had to go back to his village. There he was elected to the local village council, which helped poor people overcome hunger and harsh times. At the same time, he made many sketches for himself and an etude, and dreamed of a cycle of paintings devoted to rural themes.

However, there was a fire and all his works were burned. But willpower and love of painting, allowed him to sit down to write a big picture.

Already in the mid 30s he began to exhibit his work, and fame comes to him during the Great War.

For many years he loved to depict the life of people living on a collective farm, their life, work, joys and sorrows. Through his paintings he conveyed the whole essence

of the refraction of people in collective-farm life. As characters, he chose his fellow villagers.

Plastov has always strived for the simple meaning of the plot, devoid of the sense of taste of the sublime art – after all, in them, and without it, the great talent of the Master is felt. It should be noted that he paid great attention to the Russian woman, her beauty and a deep sense of motherhood.

From the pictures of Plastov poured cadet feelings for the Motherland and the eternal happiness of being. However, Russia, which he loved so much, a part of which was – it is no longer the same, and goes before his eyes far, into the past. He gave this name to one of his last large-scale works – “From the Past”. Here is a peasant family who, after hard work, decided to eat and rest. The artist very naturally and simply expressed all the significance of this plot, the warmth of family relations and the beauty of Russian fields.