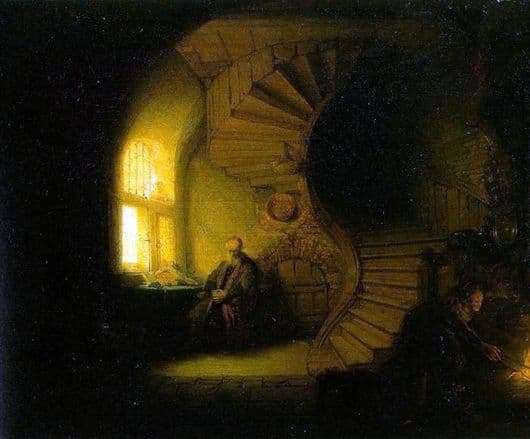 Rembrandt Harmens van Rijn – artist of the golden era of Dutch painting. The ability to embody in his paintings the whole harmony of human experiences, was one of the few achievements of other masters of art.

Rembrandt is a versatile artist who maximally shows the audience the spiritual unity of human feelings.

The work “The Philosopher” was written in Amsterdam. According to critics, the picture includes many contradictions. The central figure here is the philosopher – thinker who solves questions of worldview. People of this activity attracted the creator of their intellectual superiority, so many times had to see Rembrandt for writing masterpieces of this genre.

The picture embodied the process of studying books, the ability to think. Lighted room resembles a corner of reflection and silence. Low-key interior draws its simplicity. Realism does not fade in the picture for a second. Interesting is the image of the stairs, it is drawn with a special bend. The story says that the artist borrowed a spiral staircase from the book of his familiar writer. It creates a compositional effect, which with its spiral directs the viewer’s attention to the thoughtful image of the philosopher. The Thinker is still, however, action is seen.

The universalism of the work “Philosopher” shows moments that cannot be foreseen. Step by step, the artist makes him plunge into the world of consciousness and thoughts. The neatness of the outlines of the picture involuntarily enters into a pensive state, and the viewer fails to switch to the external environment.

A key feature that brought fame to Rembrandt Harmens van Rijne is the ability to depict the reality of human intelligence and superiority in the picture.