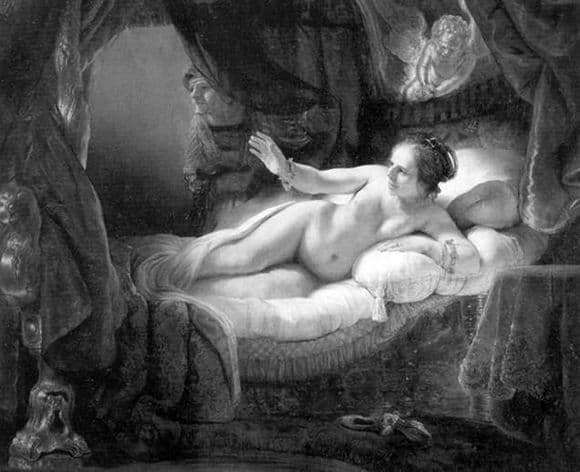 The painting of Rembrandt Harmens Van Rijn “Danae” (1636-1647) is strikingly different from modern minimalist art and is familiar even to those who do not follow the change of artistic styles. Written 400 years ago, the canvas strikes with a clear, picturesque manner and asserts the high spiritual values ​​of the era. Rembrandt’s picture was created on the basis of classical Greek myths, but the plot was made to bypass traditions. In the central part of the picture, Danae is depicted – a sweet, naked woman waiting for the coming of the god Zeus to conceive a son from him.

The pose of the woman makes it clear that Danae is waiting for her lover. She eagerly rises to meet a friend, stretching out her hand and directing her gaze towards the light. Her body is perfect, spelled clearly and beautifully. White skin is set off by a divine light so masterfully written, that creates the illusion of

illumination from the inside. Figurative and compositional completeness reaches its limit. Face, hands, body – the objects of special attention of the artist. Through them, the spiritual essence of Danae’s personality is expressed. The heroine is disinterested, her love is pure and unbiased, she is open. Initially, the lady was like the artist’s wife, but after her death, Rembrandt somewhat modified her, complementing the image of the features of the newly-made passion. But the drawing made the face more original and unlike anybody.

The result was an aesthetic ideal of the artist, who did not cease to please the viewer. The entourage of the picture plays on the black and white contrasts. Depth appears here thanks to the drapery over the bed, the figure of a maid, peeking into the distance with an eager interest. There is an opinion that the appearance of an old woman reminds the artist himself, who loved to capture himself in the most unexpected heroes. The angel above the bed is breaking the idyll with her bound hands and a weeping grimace. It is difficult to say why the artist saw an angel like this, perhaps he knows in advance the outcome of events and is sad that he cannot change anything. But be that as it may, Rembrandt’s “Danae” has been pleasing humanity for a hundred years.