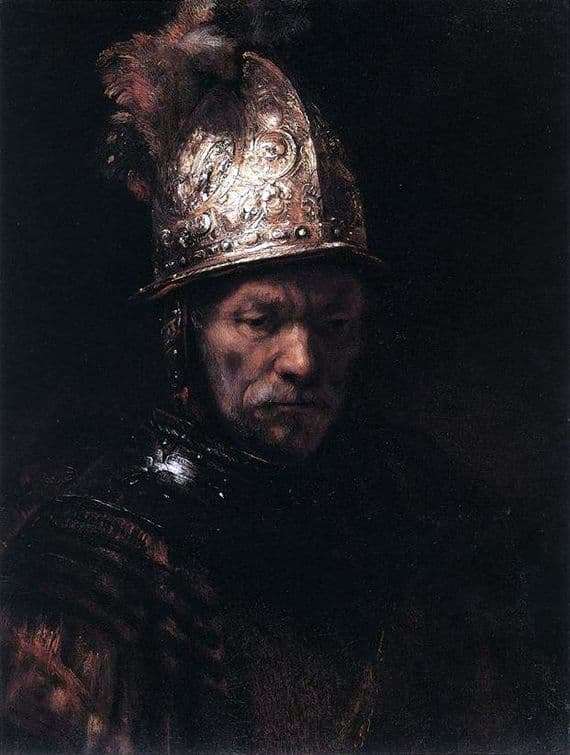 Rembrandt – the famous Dutch artist, engraver, master of light and shadow, who worked in many genres, famous for his portraits. He usually depicted old people, but without contempt or fear of old age.

On the contrary, with endless respect and conviction that the whole history of a person can be read on his face. His old men and women – full of their own dignity, wrinkled, twisted from arthritis – convey the love of man. To every man, young and old, sick and healthy.

“The man in the golden helmet” – one of these pictures. About the model nothing is known, someone believes that it was Rembrandt’s brother, but this version has no evidence. However, despite this obscurity, there is a peculiar attraction in it. Perhaps it is in contrast.

A shining polished breastplate, a golden sparkling helmet with a lush scarlet feather are beautiful things that attract the eye, clearly ceremonial, not fighting. And they put on the old soldier. His face is all in wrinkles, crumpled with life – a fold between the eyebrows, deep nasolabial folds, hollows of the cheeks. Gray mustache brush, gray hair, vaguely guessed under the helmet. Half face hiding in the shadows. And his glance does not at all correspond to the ceremonial clothes – he is tired, pensive and impenetrable, as if the soldier is looking nowhere, but in fact he sees battlefields, flowing blood, dying people whom he saw too much in his life.

Perhaps he sees the attack of cavalry, which hurries like a hurricane among unarmed people on foot. Perhaps, he imagines the nuclei flying through the whole sky, and tearing the earth to shreds. His gaze is full of boundless fatigue, as if he was exhausted and already sick of himself.

No matter how beautiful the form, if it is intended to glorify the war.