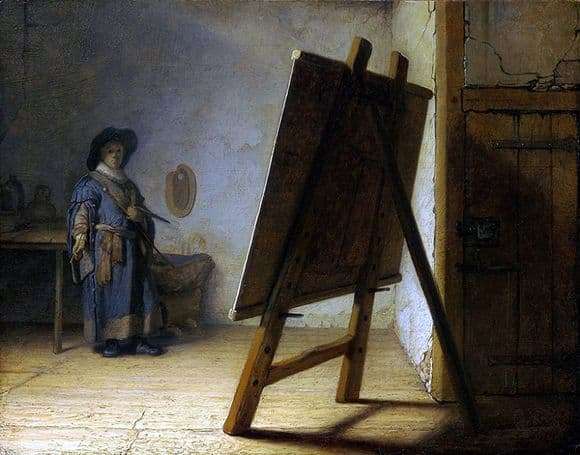 Rembrandt is one of the best artists of the “golden age”. His canvases perfectly convey the diversity of human emotions that open up in the widest spectrum. This painting is in storage at the Boston Museum of Fine Arts. A workshop was painted on it, where supposedly the creator of the canvas could work. Perhaps the artist, who depicted the creator, was his student Gerrit Dow. But many are sure that the creator of the canvas could have been this person. Due to the fact that a person is standing in the back of the room, his face is rather difficult to see.

The canvas captures the moment when the master stands in front of the easel and, thinking about something, looks at his work. Perhaps there is only a white canvas on it, on which nothing is depicted yet. The easel is located in the foreground, casting a shadow on the front door. He, as if, is blocking the creator from outside interference so that no one breaks their tandem. The artist is dressed in an elegant blouse, his head is decorated with a wide-brimmed hat. It is as if he is on an important ceremony, contemplating something important. The hero of the picture is completely immersed in his thoughts related to his canvas.

Rembrandt’s works are shrouded in mystery and riddles, carrying in themselves a certain mystical meaning and a serious message. Each of his paintings is a masterpiece that catches the eye and forces one to stand still, examining images and magnificent combinations of light and shade. The inner world of his heroes is full of spiritual experiences and anxieties, which are perfectly conveyed with the help of a brush of genius. He emphasizes the individuality of each model, trying to express it through the drawing of facial expressions. According to the latest information, it is known that Harmens Van Rhein Rembrandt left behind about eight hundred paintings. Of particular value are his later drawings made with a reed pen.