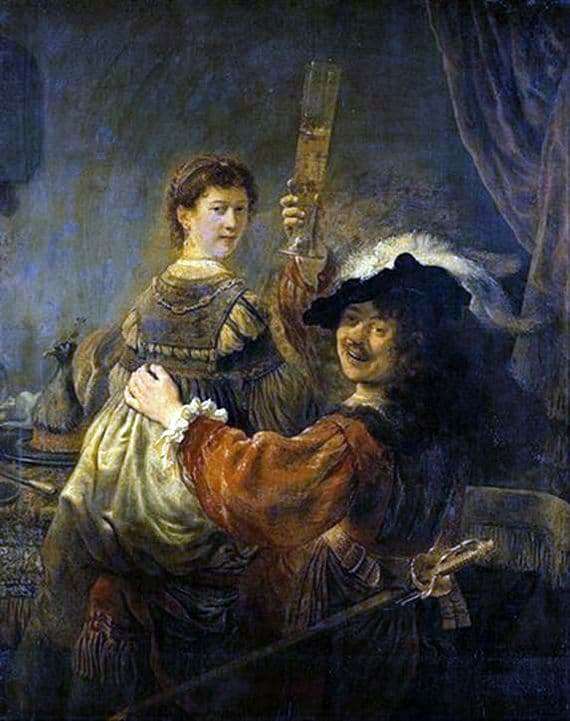 One of the most famous works of Rembrandt is his painting The Return of the Prodigal Son. But this is not his only picture with such a plot. Long before this picture was painted, he wrote the famous self-portrait “Prodigal Son in a Tavern”. Where in the role of the “prodigal son” of the artist portrays herself, and the girl, who was sitting on his lap – his wife.

The artist depicted himself with a sword, dressed in a coat. We see in his right hand a crystal glass in which sweet wine sparkles. His face is depicted as a carefree and merry with a slight smirk. With his left hand, he gently hugs Saxia’s waist, which, as if turned for a moment, to bestow on others its gaze.

The picture is a vivid embodiment of the biblical story on canvas. In the role of the prodigal son is Rembrandt himself. According to the plot of the story, this is the youngest son, who, thanks to his wastefulness, lost his estate, led a dissolute life, without thinking about his actions and without regretting them.

Saxia in this picture is depicted in the role of a harlot, dressed in an elegant dress. Paying attention to the background of the picture, you can see the peacock on a platter. Thus the author in his picture depicted the symbol of vanity. Thus, the picture bears a religious character, thanks to some of the details, skillfully conveyed by the artist.

The original is in the Dresden Gallery of Old Masters, painted in oil on canvas. Exactly 31 years later, Rembrandt completed this storyline with an outstanding picture that created a sensation for the whole world, “The Return of the Prodigal Son”. The latter picture is the embodiment on canvas of the famous parable of the prodigal son, not knowing its plot,