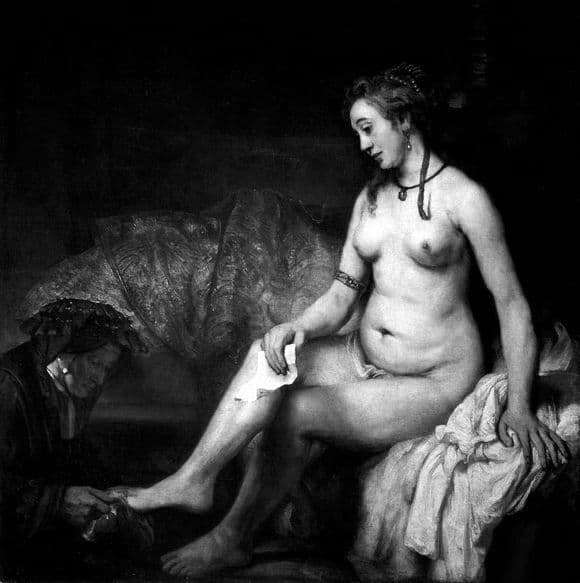 Rembrandt depicted the scene, which is described in the Old Testament. One day King David stepped onto the roof of his palace. From there he saw a beautiful woman who was bathing. David became very interested in who she is. It turned out that her name is Bathsheba, and she is married. The king ordered the servants to bring her to him.

Rembrandt concentrated in his canvas the crime of the nature of blood and betrayal of the spouse, as well as the wrath of God. We see Bathsheba at the moment when it received a message from the king. She feels that the irreparable will happen soon, and this brings sorrow to her.

Body beauty contrasts vividly with the humility of the heroine, who understands the impossibility of changing anything in her own destiny. It seems that Bathsheba is surrounded by a fabulous glow of gold. The pose of the heroine is closed. Most likely, it originated from the relief of the ancient pores.

The viewer sees a beautiful naked woman who gracefully sits on white sheets. The picture takes place in the courtyard of a magnificent palace. Bathsheba just bathed and now comes out of the bath. On the left, the artist depicted a maid carefully wiping the feet of the heroine. Bathsheba holds in his hand a letter from the king. She looks away and thinks. The whole canvas is closed and calm. Nothing can disturb this peace.

Bathsheba understands that you can not go against the wishes of the king. If she refuses to David, then he will simply send her husband to war. Criminal love is a real sin.

Rembrandt portrayed quite an ordinary scene: the maid and her mistress. Many artists addressed this topic. But Rembrandt brings a completely different sound to it.

The artist skillfully plays with color. Folds of luxurious fabric look like some kind of beast. This is a hint that Bathsheba is waiting ahead. Everything is already designated, and nothing can be changed.