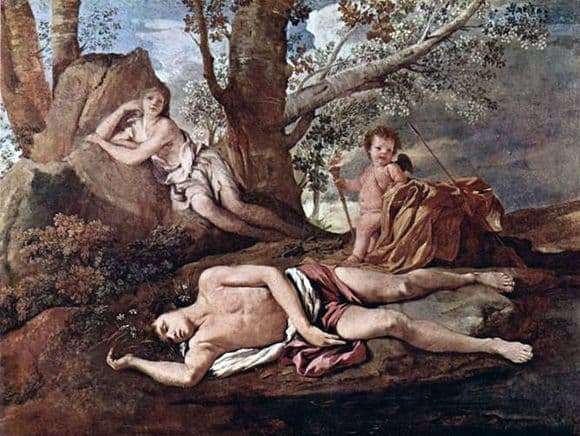 The painting entitled Narcissus and Echo, created by the artist Poussin, evokes rather contradictory and sometimes repulsive emotions among those who look at it. But ultimately, this work makes a person think about how life is organized and what place it occupies in it.

Separate work interest is caused not only because of its emotional content, but also because of its technical performance. The fact is that the picture was made according to all the rules, norms and standards of such a style of artistic art as classicism.

A kind of “triangle” consisting of the main characters of the picture is built in the front. The artist specially selected calm, soft colors, among which red-brown prevails. Each area of ​​the heroes’ body is illuminated by dim but noticeable sunlight. The whole composition of the construction is divided into two plans – this is the back, in the form of a landscape, and the front, where the main characters are displayed.

The whole plot, depicted in the picture by its creator and author Poussin, is built on one of the most popular legends since antiquity. It is important that in this work there is no dynamics, that is, the picture is completely static. It feels realism of what is happening and its own, unique and unlikely atmosphere.

After a long inspection of the picture, you can feel the smell of the forest and the breath of the wind, enjoy the beautiful chirping of birds and cool off in the enveloping sound of one small stream.

By the way, the stream is not depicted in the picture, but when looking at the landscape and feeling the atmosphere, one can imagine it.

Special attention deserves the view of the character Echo. It reads pride, thoughtfulness and calm. She seems to know in advance that everything will be fine, and Narcissa will be punished for his pride.