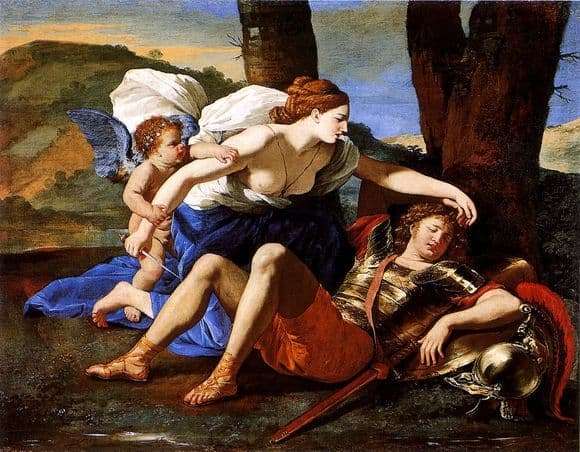 The name of Nicolas Poussin is not in vain firmly fixed with the concept of “classicism”. It was this French artist who was the founder, the main representative of the painting in this area, and all his paintings are a vivid embodiment of the classics and the monumentality of painting.

Each famous painting by Poussin is a work of supreme art, a historical monumental masterpiece with the most famous scenes of literature, history and mythology of the West.

Poussin’s composition is distinguished by chasing, rhythm, which is brought to the ideal and is readable in the work even when considering reproductions. The local spots of the Pussen’s color were not repeated before and after the artist, his technique is so professional and unique.

It is difficult to imagine a large museum that does without the paintings of Nicolas Poussin, because it represents one of the “pillars” of world classical painting.

The painting “Rinaldo and Armida” is a plot from the Italian poem by Tasso “The Liberated Jerusalem”, written at the end of the 16th century. Rinaldo and Armida are a couple in love, whose love became a landmark element of the poem and won the heart of Poussin, who imprinted her on one of his canvases.

The action takes place during one of the Crusades, after which the city of Jerusalem was conquered and the Christian kingdom triumphed. Satan allegedly sent a beautiful girl named Armida, who was supposed to charm the Crusaders and stop their path. Rinaldo, the hero of the poem, saved his comrades, which earned the desire to revenge the beautiful Armida. Of course, in the end, the hatred of Armida develops into love for his enemy, who then left her.

Poussin depicted the tragedy and murderous beauty of the love of two heroes, and thanks to his unsurpassed technique, the picture is considered one of the masterpieces of world art.