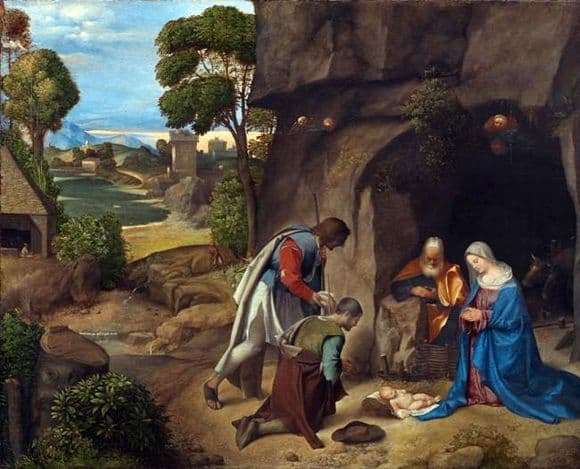 Unlike most of his contemporaries of his time, and we are talking about the era of Venetian masters, Giorgione did not try and did not write large compositions with a large number of figures on it. On the contrary, in most of his works this artist was laconic, and he expressed the essence of the paintings only through his own, internal associative understanding of the plot picture. Very often, the artist gave the audience the opportunity to think out his creative works of art on their own, on their own.

Therefore, in his work entitled The Adoration of the Shepherds, the artist depicted not only the obligatory figures, which were supposed to be there according to logic, but also a special background. He complements and takes an active part in the actions of the main characters – the family of true Saints and their knees bending as a sign of respect and devotion to the shepherds.

As for the background, his perspective, deeply

receding into the distance, closes somewhere far on the horizon. And the blue mountains close it. This display of the landscape and background behind the backs of shepherds creates a sense of the presence of atmosphere and air.

A separate role in the picture is given to lighting, which here has become somehow different, unlike lighting in other works by the artist. There is no purity and clarity, which are an integral part of the works of the Quattrocento, but there is a dim, barely noticeable light that appears after noon. This feature of the lighting gives the picture an additional volume and integrity. The caves, made in dark colors, create a contrast with the clothes of Mary and the legitimate husband of Joseph, as well as with the clothes of the shepherds, whose obedient backs technically repeat the outline of the entrance to the cave near the characters.

All this made the picture of the artist and master of his craft, Giorgione one of the most extraordinary and interesting among all the creative figures of his time.