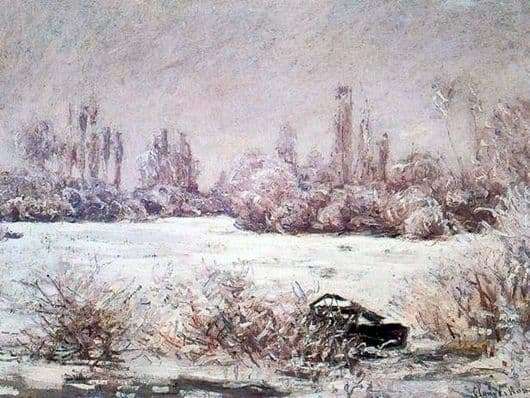 The painting was painted by Claude Monet in 1880.

The painter was a true master of landscapes. His impressive paintings amaze viewers with their special color and incredibly deep sound.

We feel the particular impression of the artist from the fact that he contemplates nature.

Every second something new happens, the shade of objects is constantly changing due to different lighting. It is influenced by the special weather, the atmosphere and other items nearby. Unusual reflexes – reflections – are discarded from each object. Monet sought to recreate the real life in his paintings. That is why he works a lot in nature (not only on etudes, but also on canvases).

The picture “Frost” is all flooded with unusual sunlight, which is felt in every detail. We do not see the sun itself, but it is broken in a special way in all objects. Nature is incredibly colorful. At first glance, it seems that at this time of the year certain monotony prevails. But actually this is completely wrong. How many colors are combined in white. He is lilac, then bluish, then gray. Each stroke of the painter is incredibly relief. We feel that the nature depicted is alive. It seems that now the wind will rustle or the trees will rustle.

The composition of the picture is intentionally constructed as follows. As if this is a small fragment from the whole life stream. Monet grabs it completely by accident. We do not feel the contours of each object. They seem to be dissolved in an environment consisting of light and air. All colors are as pure and incredibly sonorous. He does not mix colors on the palette, but puts them side by side so that they mix only when the viewer looks at the picture.

This particular vision of the beauty of nature Impressionists, many contemporaries did not understand. Such a new perception was alien to his contemporaries Monet. Only much later came the realization of what these artists wanted to say to the audience. We were able to sense the impulses of their souls, which were seen in each stroke.