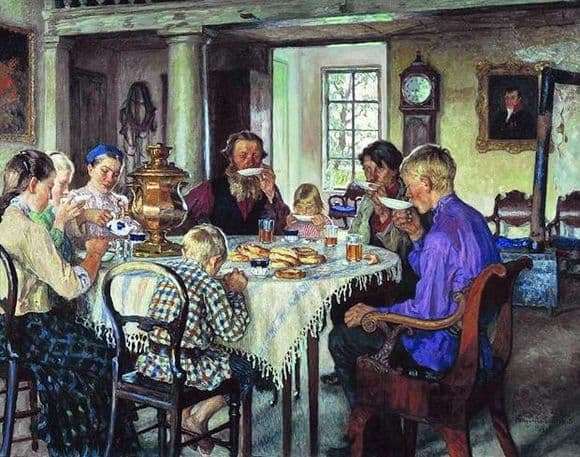 Nikolai Bogdanov-Belsky was a prominent representative of the movement of peredvizhnikov artists of the early 20th century, a successful academician and chairman of the Kuinji society committee. Little known to the general public, Bogdanov-Belsky, however, is a landmark figure in Russian painting.

Basically, the artist wrote works on peasant themes, portraits of children and depicted episodes from their education, and also captured landscape sketches, very close in technique to impressionism.

The painting “New Masters” was painted by Bogdanov-Belsky in 1913, in the village of Ostrovno, where his friend lived and worked. The canvas depicts the hall of the manor, which is located in this village. You can see a well-written interior with large windows, columns and portraits on the walls.

The decor suggests the high origin of the owners of the house, and creates a homely atmosphere. Why is the picture called “New owners”? Most likely this is due to the difficult situation in the country, because at that time the owners of wealthy estates were ruined for the most part and were forced to sell homes to richer landowners.

Many people gathered around the round table. In the center, as always, stands a polished shiny samovar – a symbol of the hearth. Children, women and men, all silently drink tea, and in the whole picture there is an atmosphere of calm and comfort. The eye clings to the simple clothing of the characters, which contrasts so sharply with the rich furnishings of the house.

Apparently, this is the rich peasants who bought this estate from the ruined boyars, and now gradually drink tea in their new possession. However, to get used to this level of life, they will need time, but for now the characters are more comfortable to stay in their own and simple clothes.