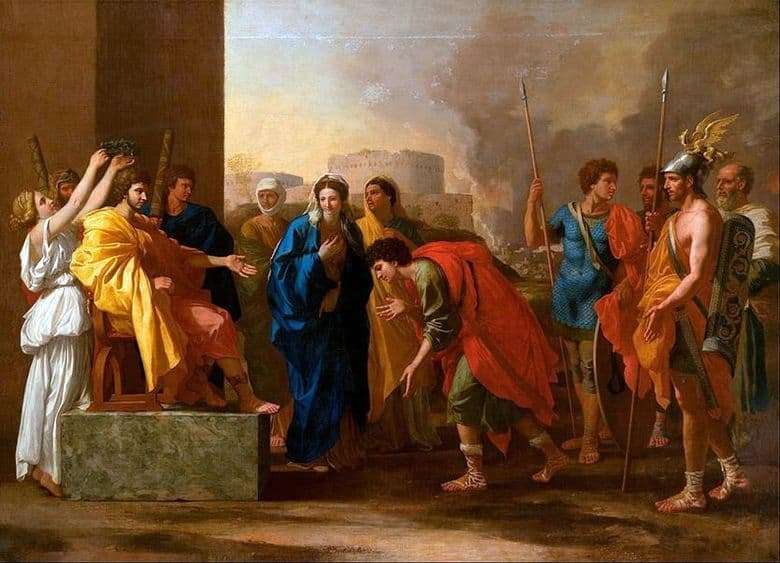 Nicolas Poussin is a prominent representative of the era of classicism. His paintings are filled with deep meaning, conveying the main emotions of the depicted heroes. The painting “The generosity of Scipio” was written based on the ancient Roman story of a famous historian who studied the culture of Rome, Titus Libya.

In the picture, Nicolas Poussin portrayed the two main characters, highlighting the most important scene from the historical story. In this episode, Scipio appeared for us in the form of a conqueror, receiving for this the military title. In front of him we see Alotia, the defeated king of Carthage. Scipio was very in love with the bride of his enemy, Lucretia, therefore, after such a significant victory, he had the power to take back his beloved, thereby trampling on the already humiliated Alotia.

Wanting to be glorified as a generous warlord, Scipio returns the bride to the former king, thereby abandoning her lover forever. It was at this moment that Poussin decided to portray how important the victory over himself, his weaknesses and passion. Indeed, in the picture we see how the mind conquers the emotions of a person. This is the meaning conveyed from the canvas of the painting “The generosity of Scipio”.

The author portrayed all the actors in this episode in a very small space against the background of burning Carthage. People seem to be divided into several small groups, interconnected by one logical chain. All the characters are very easy to read. Only by looking at the picture can you trace the emotions of each of them.

Scipio’s palm is raised up, with this gesture he makes it clear that he gives the defeated Alotia his bride. At the same time, the former king of Carthage, reaching for him with two hands, which means the emotion of immense joy from the magnanimity of the conqueror. Between them we see the very Lucretia, who cannot believe in her happiness.