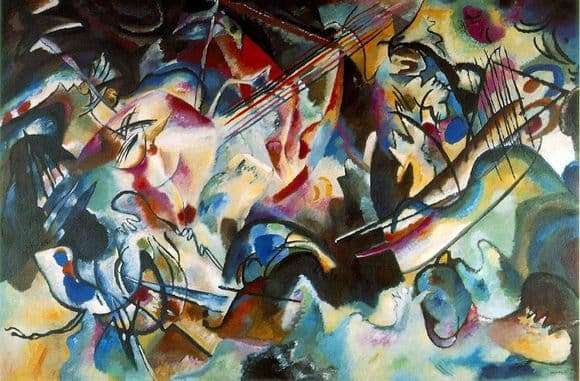 The founder of abstractionism Vasily Vasilyevich Kandinsky began to seriously engage in painting at the age of thirty, leaving for the sake of this a brilliant legal career. He studied in Europe with the venerable teachers of painting, seeking to take the knowledge from them to the maximum, but he already had his own recognizable style.

At first, the artist painted in a manner similar to the style of impressionist artists. And nothing until 1910 could indicate in his works the upcoming birth of a new style called abstractionism with its riot of color and form. The artist considered creativity the emancipation of the spirit, which was confirmed by all his further works.

For the uninitiated spectator, accustomed to clear subject forms and subjects, it is rather difficult to discern in the abstract style paintings the specifics that the author has invested in them. In the canvas, entitled “Composition VII” (working title – Flood) there are only lines, colors, and planes. But they convey the mood that the artist put into the picture.

The dramatic nature of the Flood itself is conveyed by coarse strokes of red and blue stripes intersecting with transverse black lines running down from the top of the picture. To mitigate the artist used a pink play of tones of varying saturation, bringing to the canvas some kind of solemnity. Dark brown forms are notes of hopelessness, and yellow and green strokes are designed to balance the overall palette of the picture and give extra activity to everything that happens on it.

In general, Kandinsky sought not only the display of the flood as a dramatic moment or catastrophe, but also the subsequent act of creating a new world. In the picture there is the dynamics of the movement of life, expressed exclusively by color and indefinite forms.