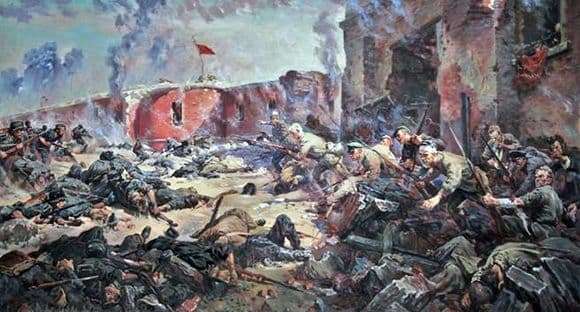 Pyotr Alexandrovich Krivonogov is a battle painter whose paintings have become classics of battle paintings and the graphic chronicle of the Patriotic War. Cloths are included in the collection of Russian realistic art. PA Krivonogov was a member of the art studio of military artists, specialized in military subjects and agitation-military graphics. A year after completing his studies, in 1940 he was enrolled in the ranks of the Krasnoarmeisk studio, having completed the journey from Volokolamsk to Berlin with the troops.

During the war, Pyotr Aleksandrovich actively and with double force makes many sketches and graphic works. Most of them are portraits of soldiers with whom the artist has passed half of Europe. After that, when creating full-scale images, it helps to recreate the terrible, decisive destiny of the whole world, battles with bright, reliable and uniform emotional self-awareness.

One of the paintings glorifying the feat of the Russian troops is “The Defenders of the Brest Fortress”. The canvas was written in 1951. Material for capturing one of the most ambitious and fierce battles was going to carefully, bit by bit, and demanded a long and careful study. It was incredibly difficult, since P. Krivonogov was the first to address the subject of defenders of the Brest Fortress. The heroic feat was not described and is mentioned neither in literature nor in art. Pyotr Alexandrovich spent a lot of time directly on the battlefield. Among the ruins of the fortress were made hundreds of sketches and sketches.

On the finished canvas, the artist depicts the moment of battle at the Tiraspol gate. Back in 1941, on June 22, the soldiers of the Brest Fortress demonstrated an unprecedented courage and legendary heroism of our people to the advancing invader. The picture captures the most acute moment of the battle. After a month of siege, a handful of wounded and exhausted fighters remained from the defenders of the fortress.

Blood-stained clothes, white bandages that hide the wounds and bodies of fallen brethren on the barricades. At first glance, a typical military drama finds new development and perspective. P. Krivonogov enriches the moment with comprehensive details and color solutions. The remnants of the garrison are not a faceless mass, but a single, military brotherhood striving for victory. Decisiveness, frozen in the faces of the defenders, fearlessly rushing towards the newly advancing German troops.

An illustrative symbol of the unshakable resilience of the defenders are the red banners – one proudly developing in the background, and the other in the foreground with the eloquent inscription “Long live communism!”. A piece of blue sky, visible through the clouds, and the rays of the sun, separating the two opposing sides, and sliding along the walls of the fortress, also bring a sense of hope for the best, the triumph of courage and perseverance of the Soviet troops.