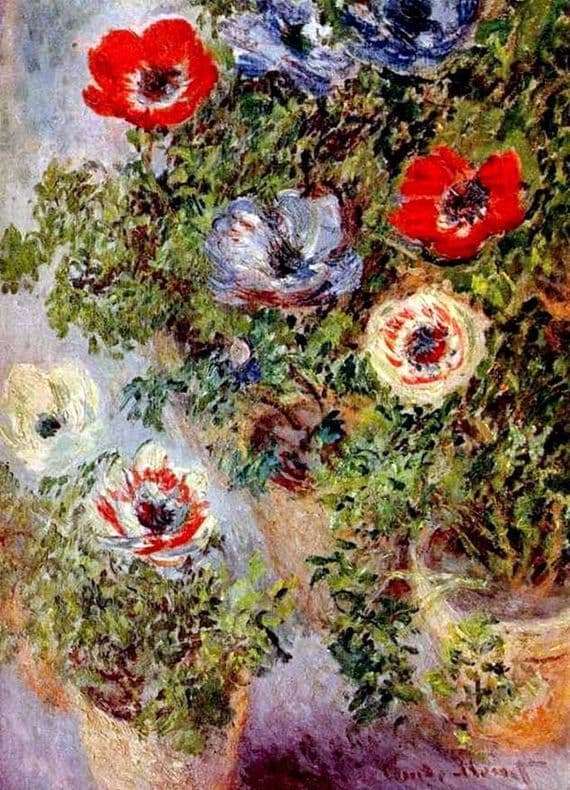 Monet is a French impressionist, as well as all his colleagues in the genre, who tried to grasp the surrounding reality more fully and to transfer it to paper, because time is running out all the time and beyond human power to catch it, if not with a brush and paints.

He began, however, with caricatures – he gained early fame with their help and was very popular in his city. This period ended by luck – he met a mature artist (originally Monet did not like him in absentia), who showed Monet nature, directed his sharp eye, attention to detail, the ability to quickly grasp and the right hand to imprint something worthwhile. And Monet, who at first did not experience any trepidation in front of the world, through his own works, began to realize how beautiful he was and to work on capturing him with diligence and vitality, which were always inherent to him.

“Anemones” – a simple his still life, which depicts simple flowers. They are not put in a vase, they do not blow pathos of roses or the heights of hyacinths – they grow in simple pots, the ground in them is moist and loose. The flowers themselves are multicolored, bright, they stand out on a smooth background of green, pale lilac, different shades of brown, like tropical birds in the forest of the middle lane.

They are written in light quick strokes, very accurately and at the same time a little careless, several colors are cut off by the edge of the picture, as if all their brightness could not fit into it. Perhaps the artist depicted someone’s small garden, which impressed him with its frivolity and naturalness. Flowers will always bloom, even when the human world does not disappear, they are not angry, do not slander, do not lie – they just are, delight with their beauty, delight with the smell.

A frozen moment with flowers that in reality have long faded away – “Anemones”.