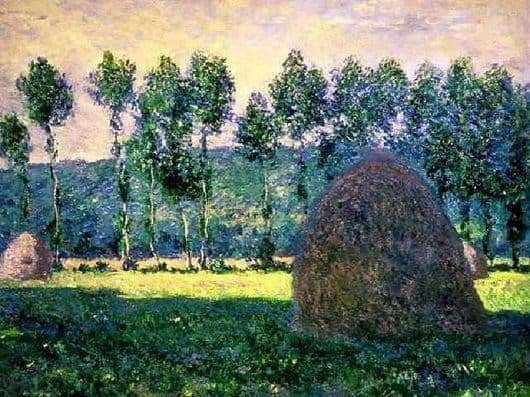 The main expressive means that Monet uses in his paintings, you can safely call the light. The play of light and shadow fascinated the artist with its elusiveness and variability. Claude Monet observes the “behavior” of light in nature. He sees that the same objects, the same landscape with different lighting look completely different. The artist decides to try to reflect his observations with a brush and paints. So there is a cycle of his paintings, which includes “Haystack.” Monet worked on a painting in a place called Giverny. The full name of the canvas, completed in 1889, sounds like this: “Haystack in Giverny.” By the way, in the same place Claude painted many other paintings that brought him worldwide fame and recognition.

At first glance, in the film “Haystack” there is nothing remarkable. Unclear, that in general could attract the artist and inspire him to create such a masterpiece. Before us is a completely everyday picture of the countryside of the French hinterland. Horizontally, the painting canvas is divided, as it were, into several layers, layers. In the foreground we see a strip of dark green grass. On the right in this lane there is a huge haystack, which immediately attracts the attention of the contemplative of the picture. The cone of the stack is slightly uneven, which only enhances the authenticity of the picture.

Right behind the stack ends the zone of shade with green grass. The area begins, illuminated by bright sunlight, the grass becomes bright green, with a yellow tinge. The border of light and shadow is very clearly visible. It does not go straight, but slightly horizontally, which adds a bit of movement to the picture. The next layer of the picture of Monet – a series of rare trees growing in a row.