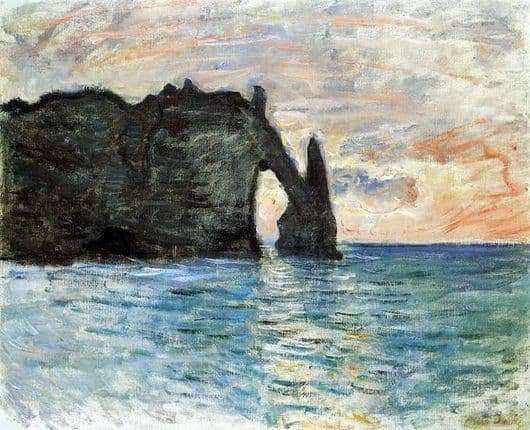 For a long time, many artists have noticed that the most extraordinary cliffs are located in the small town of Etretat in Normandy. His small guesthouses gathered many lovers of swimming in the ocean and contemplating the living and vibrant nature.

The rock that Monet depicted in his picture a little earlier was described by one French writer. The sky in this place merges with the water into a single whole, and the moody and large cliff throws a huge shadow onto the sandy shore. The tops of the slopes of the sun flooded with bright evening light. A strikingly striking rock, resembling something of a large elephant, has sunk its trunk into the water.

Claude Monet often visited the seashore to bring amazing seascapes to paper. Several times he visited the beach near the English Channel, where rocks, broken by winds and waves, towered over the ocean like fantastic arcades.

The cliff depicted on the canvas, still in his youth, captured the attention of Monet, thanks to the winning story. In 1883, the master returned to the shores and cliffs of Etretat to begin work on the painting. He chooses a place at the foot of the cliffs to the west of Etretat. It was there during the tide, illuminated by the winter sun, he painted his canvas.

Monet painted over 6 dozen paintings when he was in Etretat, and he devoted 6 of them to one cliff in the form of a large arch. The dark top of the rock stretches along almost the entire canvas. It occupies a key place in the plot. Solid strokes of dark blue, pink and golden colors represent the surface of the sandstone and repeat the wave of the sea.

Tiny distant human silhouettes on the back side show the scale of the rock and its power. The nature depicted on this canvas appears to the viewer as powerful and magnificent.