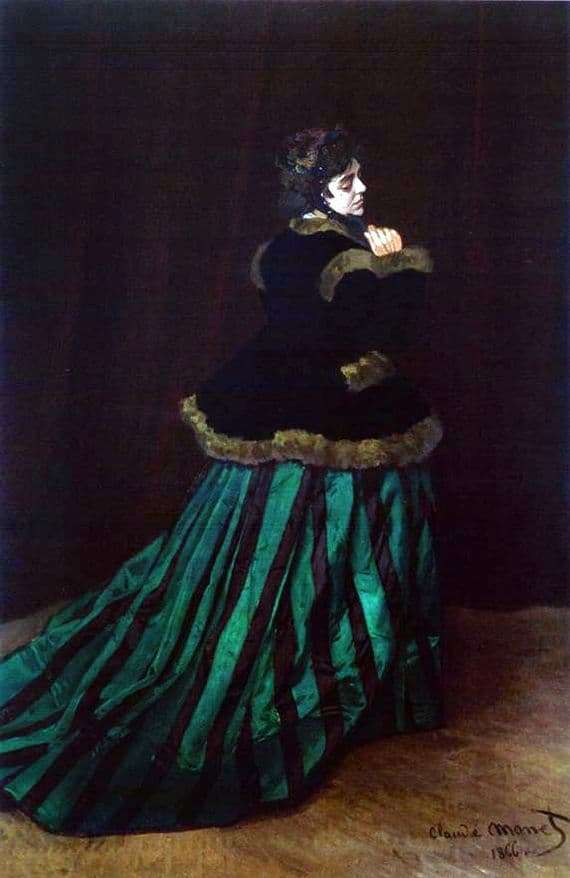 Monet – French artist, one of the founders of impressionism, is famous. He began, however, with caricatures – his family was not rich, and Monet’s hand was light, his eyes were true. He accurately noticed the main features of people, did not hesitate to increase some, reduced others, and at fifteen was known as a talented cartoonist. They came to him with orders, he sold some drawings in an art shop, and there he met Buden, a man who later became his teacher and directed his attentiveness and sharpness of mind to nature and people. Monet left caricatures and took up real painting – still lifes, landscapes, and, of course, portraits.

“The lady in the green dress” depicts the artist’s wife, Camilla, who at that time was not yet his wife and even his bride. Then they just met and Monet was in love with a girl. After one of the meetings, in a few days he painted a portrait of the beloved, capturing on it an exciting, tremulous moment, in which the girl, who had already left, turned around on the threshold. He did not draw the background, concentrating fully on Camille – on the bend of the neck, on the chin line, on the raised arm (as if an unfinished farewell). He lovingly wrote out her coat, paid a lot of attention to the dress.

The picture shows love not for the image or the dream – there is nothing air in it. It shows love for a real lively girl – and let her face not be perfect, but bending lips, skin tone, a dress that does not fly behind her, but crawls on the floor, because it is real and made of heavy fabric suggests that Monet did not need an ideal. He wrote what he saw, what he loved with all his heart, and wanted to convey in its entirety the image. Without embellishment, which would only offend a girl. Without undue complexity. Camilla subsequently became his wife, and never grumbled if there was no money in the house or her husband did not pay attention to her, completely absorbed in her work. And the picture remained – the memory of the trembling of a young lover and his ardent heart.