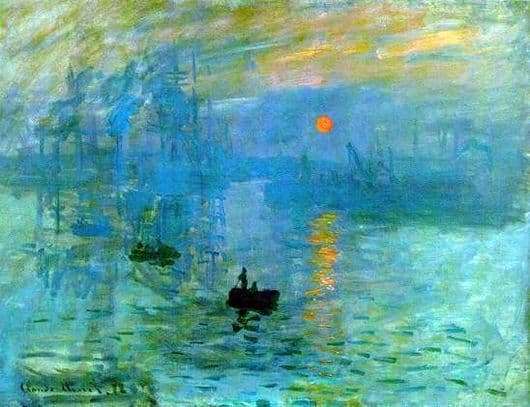 Monet’s work “Impression. Sunrise “was created in 1872 or 1873. She gave the name to a separate direction in art. The object of the image was the port of Le Havre, which is only slightly indicated by light strokes. Due to this, the viewer can not only enjoy his beauty, but also assume the continuation of the mysterious image.

Monet, like other impressionists, paid much attention to color. In the painting “Impression”, the artist depicted both the sun and the sky equally dull, which gives the viewer a feeling of dampness and morning twilight. But surprisingly, Monet wrote it with bright colors, without weakening their saturation at all, which could not have surprised and interested the viewer. It should be noted that the reflections of the sun in the water and the luminary itself are depicted in one color.

If you make a picture in black and white, these images will almost disappear from the canvas. At the moment, the picture “Impression. Rising Sun “is in the museum Marmottan. It contains a large number of paintings by Claude Monet. In 1985, work was stolen from a museum, and it was succeeded to return it only in 5 years. Since 1991, the masterpiece again pleases the audience in its former place.