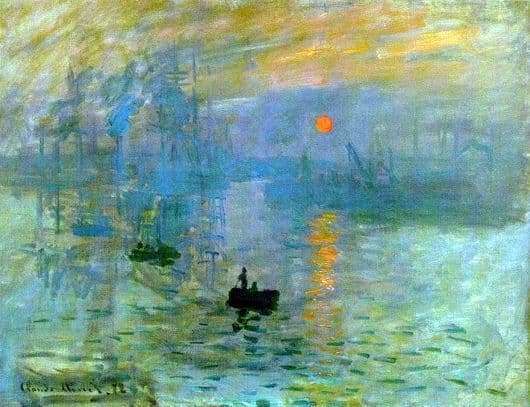 The painting “The impression of the sunrise of Claude Monet was written by him in the morning, during the artist’s stay in Le Havre, the city of his childhood. The picture shows the morning sunrise in the port, a kind of symbol of the industrial revolution of the 19th century.

According to some art historians, Monet’s painting “Sunrise, Impression” depicts a port that can be seen from the windows of the Admiralteisk hotel in Le Havre.

Painting Monet has a rich history. At first, critics did not want to accept it, considering the picture of a mediocre one. But still the picture was popular with the public, it fell into the hands of private owners, resold for a ridiculous price.

The picture in the foreground shows the sea in blue-green tones, two silhouettes of fishing boats are highlighted. Fat dark brushstrokes and unexpressed silhouettes of departing boats give a clear feeling of the depth of the sea. All the colors used in the picture “Impression, Sunrise” are dull, muffled. The only bright spot on the entire canvas is the clear-orange disc of the sun rising over the French town, spreading also in the reflection of the restless sea water.

In the background, in the gray-blue fog, the silhouettes of sailing ships, cranes at the pier and chimneys are barely noticeable. The smoke from the chimneys points to the northeast wind.

If you look closely, then the sun is not a bright spot here. Art critics and scientists at Harvard University using a photometer, it was determined that the degree of brightness of the depicted sun and a piece of clear sky surrounding it are on the same level. Features of the human retina perceive the orange color of the sun as the brightest spot in the picture.

The pale orange rays of the sun, mixed with dirty gray smoke almost do not give the picture clarity. It is not the sunlight that reigns in this area, but the artist is hinting at the veil of industrial smoke.