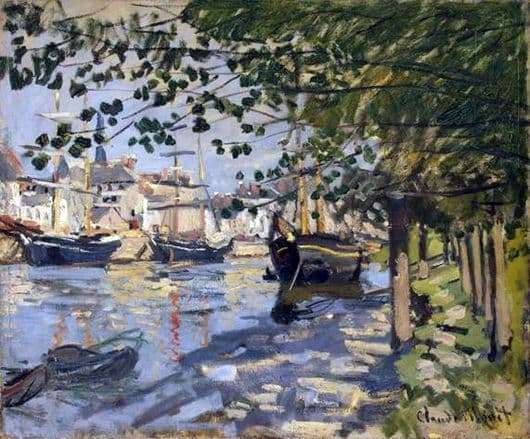 This picture refers to the early period of the artist. Being written in 1872, it coincided in time with another, more famous canvas by Claude Monet’s “Impression”, which marked a new trend in Western European painting – impressionism.

Monet sought not only photographically to transfer nature to the canvas. For the artist, it was important to convey the impression of surrounding objects, which could change their appearance every minute under the influence of sunlight or just an unexpected neighborhood with other objects. Monet rejected the principles of academic painting, for which it was extremely important to observe the transition from light to shadow.

The artist decided to trust his own eye and thereby rediscover nature for himself. That is why on the impressionist canvases all objects are as if slightly smeared with the breath of air. The image of Monet loses its smoothness, although it also acquires the ability to capture even the most insignificant movements in nature. Because of this, one gets the impression that life itself is poured on the artist’s canvases, and the viewer has the role of observer for its endless stream.

All of the above features of Monet’s impressionist canvases can be freely applied not only to such famous Monet’s works as “Breakfast on the Grass” and “Impression”, but also to the “Sen in Rouen” canvas.

The picture shows the river, which strikes the viewer with its vitality. It seems that the wrong reflection in the water of the ships, and the green leaf tissue, barely swaying the winds, occur here and now, and not more than a hundred years ago. A little bit more – and we will smell the grass, hear the noise of the leaves. This feeling is not accidental, it is explained by the impressionistic technique that Monet used for his early works.