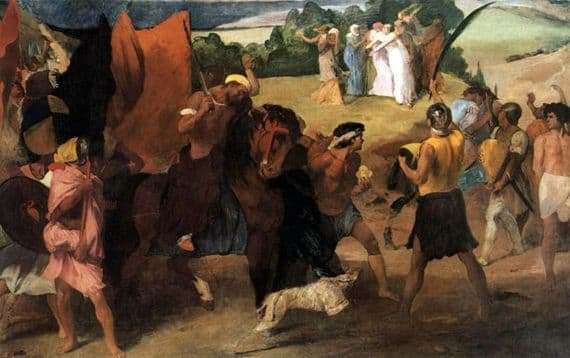 Degas is a 19th century French artist. His real birth name was Edgar Ilar Germain de Ga. In 1870, the artist decided to change his name and added the prefix de to Ha. His canvases are known all over the world and are part of the cultural heritage of France.

“The Daughter of Jephthah” is one of the pictures that Degas wrote on the subject described in the Bible. It states that a judge lived in the tenth century BC, who was the ninth in Israel. He was also a warlord. He was born to the mother of a harlot. When his stepbrothers lent him a legacy, he abandoned everything and went to live in the Desert of Tov. There he contacted the gang and became their leader. But his soul ached for the homeland, which suffered from the yoke of the Ammonites. Unable to withstand it, the people of Israel decided to turn to Jephthah and begged for help.

Ataman took pity on people and promised to help overthrow the yoke. Before God, he made a vow that if he triumphed over the Ammonites, he would sacrifice the self-immolation of the first person to leave his house. Soon Jephthah triumphed, freeing the people of Israel. Then he remembered the promise to God. When he approached the house, his daughter came out on the threshold.

Then Jephthah explained to her her future destiny. After that, the daughter asked him to stay with her friends in the desert to mourn her account. The father agreed, the daughter stayed with friends, after which she was sacrificed.

This episode of the Bible causes a lot of controversy, because Christianity strictly prohibits sacrifice. Researchers argue that this information should be perceived differently. And Jephthah sacrificed a daughter, as a novice. She began to serve God and remained virgin.

More precise information is not possible to find out, because no one knows where the Israeli judge is buried, and there is no way to trace his descendants.

The canvas is in storage at Smith College Art Museum. USA.