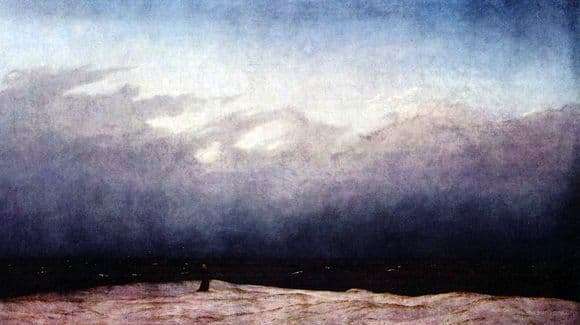 Frederick always adhered to religious themes – this topic was most interesting and close to him. “Monk by the Sea” – a picture that, along with another (“Abbey in the Oak Forest”), brought him success. It depicts a calm dark sea. The lambs of the waves run along it, the surf rustles against the shore. On it, on a flat bright earth, stands a monk in a brown cassock.

It is impossible to consider whether he is young or old, but his posture indicates calm and peace. The monk waits for nothing, hopes for nothing. He just stands, slightly throwing back his head, keeping his back straight, and looks at the sea, which is playing with itself and slowly eroding the shore. Above the sea, almost merging with it, the sky. Heavy clouds on the horizon lie on it a wet pile, but the higher towards the sky, the easier and whiter they become.

They curl into whimsical spirals, form vague shapes, which are painted not by the artist, but by our imagination. And above them is a clear sky. If the color of the clouds is dark and cold, grayish in the lightest part, similar to the color of the sea in the darkest, the color of the sky is very different from it. It has notes of yellow. It seems airy and gentle, like the sky at dawn. The higher, the darker it is, but it is a darkness of a different sort than at the sea. She seems neither oppressive nor threatening, she hints at the stars and the moon, which somewhere in immeasurable height swirl above the world.

What can a monk look for in such a sea? It is unlikely that he is waiting for the ship, because he is not in the port and not on the pier. Rather, he simply listens to the silence, which breaks only the whisper of the waves and the cries of gulls, which any sea necessarily has. Rather, he is simply looking for God in the outside world, who, they sat down to believe in Christians, is everywhere. It is enough to be at peace with oneself and with nature in order to feel its presence.

The whole picture breathes this harmony; it is the ability not to conflict with nothing, being at the same time part of the sea, the sky, and God.