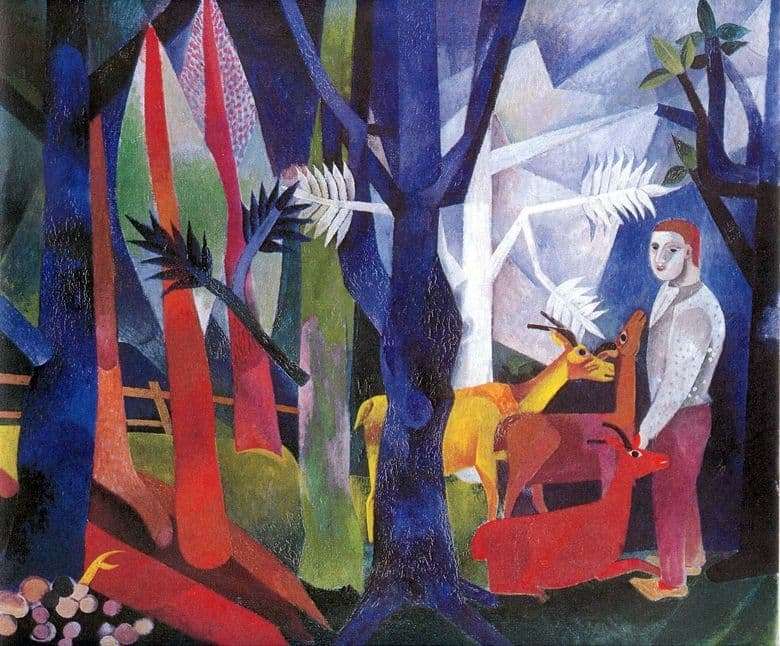 The painting “In the Forest” was painted by Heinrich Kampendonk in 1919.

Being already a very experienced artist, he quickly came to understand the concept of a new direction in painting and this, of course, was reflected in his works. This explains the appearance of a new color interpretation of the image, the technique of lines and colorful spots. In addition, Campendonk was passionate stained painting and well versed in it, but did not imitate it in his paintings, and created a strong effect of stained glass writing.

All lines in the picture have a clear beginning and end, no curled, looping and winding lines, all rectangular, angular, clearly spelled out with softened turns and volumes.

The picture also reflected the infantile attitude to animals with notes of biblical bias and a pantheistic philosophical context about the brotherhood of man and nature.

This picture does not create feelings of anxiety or protest, on the contrary, it involves a person in communication with the natural world. So the artist depicted a man in the forest, stroking forest animals.

Kampendonk portrayed three creatures similar to toli on gazelles, toli to peculiar deer, but he also did not cheat them with color. The red one nearest to the viewer lies on the ground, the second that is stroked by a man, is brown with a strip of pink in the middle of the body. A short distance away from all of them, the largest of them, an individual of yellow color, is drawn with a rougher drawing of the features of the muzzle, due to which it seems to be a male. He does not reach for the hands of a man, he just watches him.

To date, the picture of Heinrich Kampendonka “In the forest” is in the Detroit Institute of Art in Michigan in the United States.