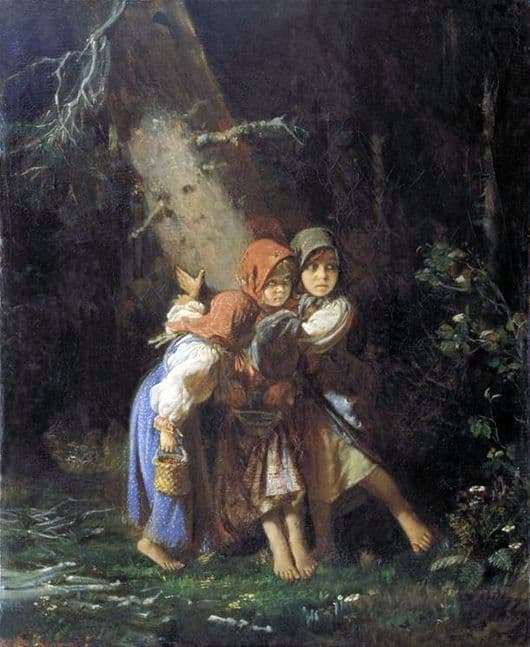 The picture was painted in 1877 in oil on canvas.

The canvas is written by artists on a previously developed plot.

Girls’ eyes are filled with drama, something frightened them in thicker ones. Who knows why they fell into this broadleaf forest. Perhaps they just walked around, went for berries or flowers.

In the hands of girls a basket. But suddenly their gaze rushed off into the distance, where something had happened that made them afraid and snuggle up to each other. Perhaps there, in the distance, they heard the howling of wolves or the roar of a bear.

The richness of the Russian forest makes us draw in the imagination of various subjects. On the faces you can see not only fright, but also children’s curiosity. On the canvas, we can clearly understand the skill of the artist Korzuhin. What is happening is filled with light and shade effects that cause anxiety

and concern for poor peasant girls. Peering deep into the forest, you are afraid of its dark thicket.

Excitement is enhanced by the effect of light that falls on a tree. His trunk is powerful, which speaks of its long history. Such forests are characteristic of our country and are the pride of the people. By the simple attire of girls and their bare feet, we can see how simple peasants lived in past centuries. The heads of the girls are covered with color scarves, also sundresses are worn on them, all Russian women wore them.

About Korzukhin’s painting “Peasant girls in the forest” said that the whole forest background was made by the artist Shishkin, everyone claimed this, but a detailed study of the picture showed that there were no strokes characteristic of Shishkin’s hand that spoke of his authorship. Which once again underlines the great skill of the artist.

Landscapes Korzuhina – this is a great heritage of our country. His canvases make it possible to see not only the beauty and power of Russian nature, but also the life of people of that time.

The picture is in storage in the Perm State Gallery.