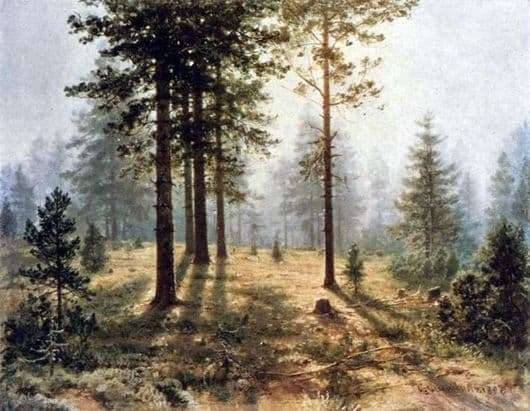 Have you ever been to the forest when the fog completely mastered it? Or when he slowly enveloped the forest with his own steam – so thick and so alive – that it became scary. And what if there is someone inside the fog? And what if this someone is some kind of forest beast? This feeling of fear owns a man all the time while the fog is around. After all, the sounds in the fog become deaf and if it is thick, then you just don’t remember where to go and with probable accuracy you will come across something unpleasant.

The fog that the talented landscape painter Shishkin depicted on his canvas is certainly not thick, even the sun penetrates through it. But the mystery of this natural phenomenon, however, has not dried up.

Look, we can clearly see only what is in the foreground, and what is behind is in unsteady fog. And even the shadows of the trees are not clear, clouded or something… But the artist

actually shows us a rare forest, not thick. It was unlikely that the sun could penetrate the foliage in the dense forest, but here it did it.

The master took everything into account in his canvas. Spruces and pines are well traced, broken branches in the foreground, hemp trees. And by the way, more and more often you are convinced that the artist’s favorite season is autumn. Because now, it seems that the action takes place in the fall. The grass is not so green any more, and the sun warms up not so hot. That is why the fog does not evaporate, but rather increases slightly, that is, copes with the light. And it is thanks to the sunlight that the artist shows us the condition of two trees, relatively young.

One has already lost its foliage and is ready to meet the cold, and the second is darkened opposite – this is a pine, and as is known, it does not lose needles. That is why its shadow is thicker, and near the tree the shadow is barely noticeable. And, as a rule, spruces and pines grow together, side by side, because it is so easy for them to grow in the forest. And then the tree is one, and not too weak,