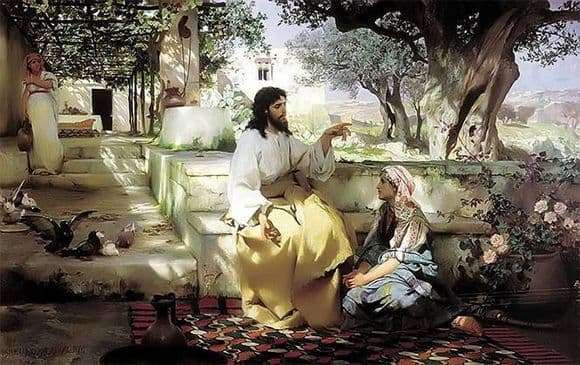 Heinrich Semiradsky was born in Poland, studied and worked in Russia, because of which, in all likelihood, he was equally recognized as a Polish and Russian artist. Antique and biblical scenes prevailed in the work. Owing to his adherence to the themes of the past and his courageous graphic techniques, Semiradsky’s works were criticized, and sometimes the reason for rejection was the difficult and complex nature of the master himself. Despite the considerable merit and recognition of the audience, the relationship with the Academy of Arts and the Association of Russian painters were not easy. During the life of Semiradsky, many of his works with the same enthusiasm were accepted by the public, but were subjected to the critical eye of colleagues.

For the first time, the painting “Christ is at Martha and Mary”, the artist presented to the audience at the exhibition of the Imperial Academy of Arts. The work had a contradictory, but indelible impression. The story was taken from the New Testament. The picture captures the moment Jesus visited the home of Martha and Mary. These girls are the sisters of Lazarus, the one who was raised before Christ by their prayer.

The painter masterly mastered the skill of forming a special environment and its harmonious combination with the creative action. Semiradsky was able to bring in a boring stamped posture and motifs a new and unusual sound, with a fascinating and entertaining plot. The images of the sisters define the two faces of the Christian life: striving towards the creation of good deeds and contemplating the inner world. Based on this, Mary listens and hears the feet of Jesus Christ. Martha, frozen on the steps with a jug in her hands, is all about care and bustle – her lot is action.

The main role is assigned to the landscape. Jesus and Mary, brought to the fore, complement it, smoothly interlacing with the iridescent shadows of trees and bushes in the garden. People reflect in relaxed and smooth movements and gestures reigning around the noonday bliss.

Refined and unique technique Semiradsky created bright magnificent pictures. Following the laws of European academism, the artist brought in his picturesqueness, open air effects, chamber idyll. He was the first to take the path of undermining the outdated foundations of the academic system, replacing them with the spontaneity, fascination, and amusing subjects.