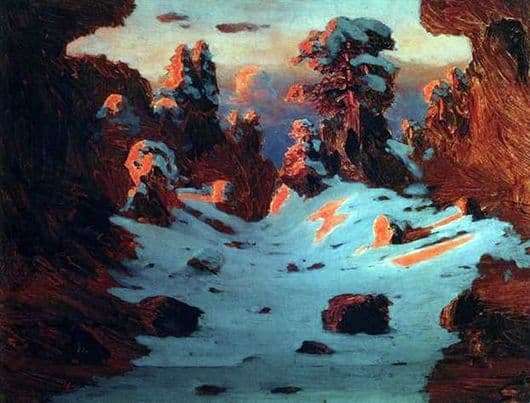 When the color in the picture turns into light, it can be said with great confidence that you can see the canvas, which belongs to Archip Kuinji.

It would seem that canvas, oil paints, and suddenly there is a real glow from somewhere, as if there is some kind of invisible lamp under the canvas. It seems that it was light that became the main character of the artist’s paintings. In his work “The Sunset Effect” light – red.

At first, its glare seems unreal, but if you remember what sunsets are in reality, then none of them is like the other, and sometimes they paint objects in the most bizarre colors. Here snow, rocks, pines were colored. Apparently, this sunset in the mountains, and there, due to the fact that some of the rays hide behind the peaks, the palette becomes generally rich and completely extraordinary.

Transitions from one color to another are much sharper, more radical. That is why the canvas is called “Sunset effect.” In the mountains, these are effects. And they can literally change every minute, becoming a rich food for the imagination of any creative person.

So here, on the immortalized mountain landscape, it seems that a minute or two will pass, and the red hares of the setting sun will disappear, giving way to another unique effect. In the valleys, as their inhabitants say, sunset is swift. And only the hand of a true artist gives us the opportunity to enjoy this moment as much as we want.

A hollow covered with snow goes somewhere far away and goes down, to another site where everything looks different. But we can only guess about it, looking at the blue-purple sky in the background. Yes, at first the light seems unreal, but the longer you look into the picture, the more you want to get into this mountain world and touch the rocks on which red sunbeams froze.