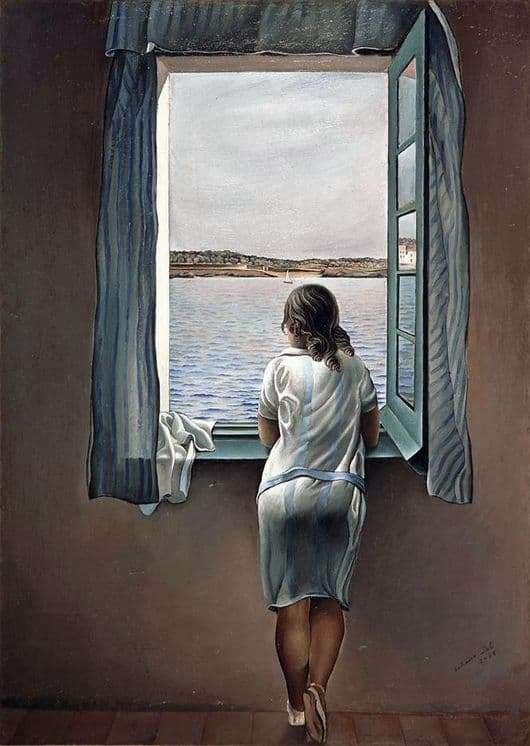 In the early works of Salvador Dali there are boyish maximalism. Young men are becoming: more susceptible to the surrounding reality, more acutely reacting to problems, looking for their place in life and much more. Loneliness and some austerity of decoration are seen in many works.

The painting “The girl at the window” is one of the best works of the artist in the early stages of creativity. Anna Maria served as a model for the canvas. She looked after Dali for a long time and remained his muse.

A feature of the picture can be called drawing a woman from the back, who looks away into the distance, wanting to look beyond the horizon. It acts in a hypnotizing way, attracting and stopping attention. One feels the peace of an ascetic environment, which harmoniously combines with nature from the outside world.

Also, the canvas has a deep psychological meaning, reflecting the young girl as an unformed person, who has just glanced into the new and unknown world. She is awaiting change, which she is looking forward to and afraid of. Viewers do not see her face, but everyone can feel her desire to move forward. A room is like a closed world that it wants to expand. The absence of objects is the beginning of knowledge and accumulation of experience. The more the girl finds out, the more filled the room will become. She stands barefoot on the floor, like a child who feels connected to her parent’s home.

It is not by chance that the window overlooks the sea, symbolizing freedom and determination. But there is always a negative part as unpredictability, a riot of waves. So life will be uncertain, with its ups and downs. The port of Cadaqués opens up the opportunity not only to go to their native lands, but also allows you to go on an endless journey to other countries.