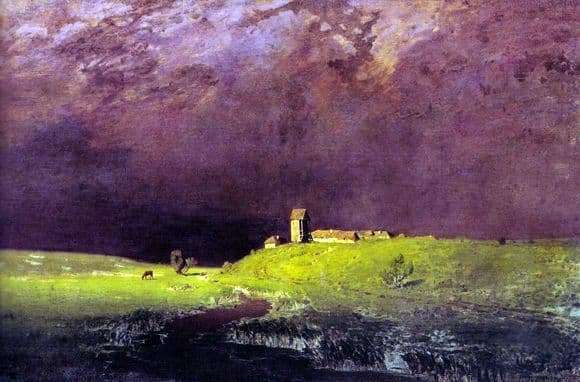 Kuindzhi – Russian master of landscape, nature in the paintings of which appears almost animate, living creature that exists in parallel with man.

“After the rain” depicts a farm somewhere in the south of Russia – nowhere else is such saturated colors, electrical tension of air, from which hair stands on the back of the neck, where the most sensitive place is.

Dark heavy clouds hang over the world. They are written out with an expression, similar to the seething cauldron of a wide variety of mixed colors. The rain was just pouring out of them, the sharp blades of lightning glittered, heavy thunder rumbled from their collisions. But now, the thunderstorm was over, and a lumen was visible in the clouds – a barely noticeable blue, which is more likely even a premonition of a clear sky than it is. This gap is enough for the sun to cast down the shining rays. They spotlight, as a divine radiance,

a patch of grass that seems to be the earthly vision of paradise.

The farm itself is flooded with the same light. Low houses are molded to a friend, as if frightened by a thunderstorm, runs toward a narrow, overflowing river, a road. A lonely horse grazes nearby, and there are no people in the picture, only a full-blooded, wet sensation from a past thunderstorm, the exultation of nature that survived the cleansing.

The Slavs believed that when thunder rumbled, the earth would marry heaven with heaven. The Scandinavians believed that it was God Thor, a red bearded man, riding his chariot across the sky and throwing a hammer into the creatures of darkness, wishing to take over the world. For all religions – pagan, tied to changes in nature – the storm was a kind of supreme act of purification and love, and it is easy to understand.

After the rain, nature breathes freshness. It seems that the sun shines brighter, and breathes deeply so well that the air seems like a heady wine.

“After the storm” perfectly conveys this feeling. Looking at her means reliving all the thunderstorms of your life.