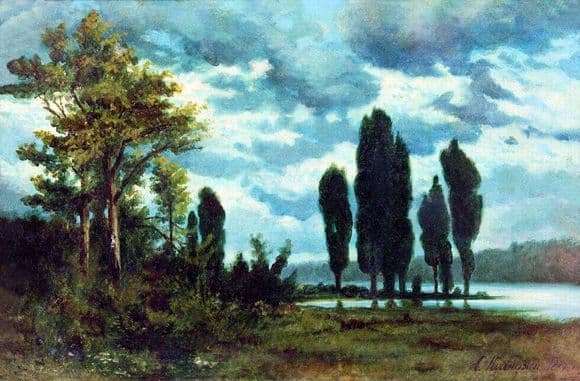 The picture was created by the artist during his creative searches. Kuindzhi in the 1970s begins experimenting with light. He is interested in the ability to accurately convey the natural lighting of the landscape. To this end, he mixes natural tones and creates many of their shades.

His “Landscape” in 1874 was one of the clearest examples of his creative explorations. Nature is captured with documentary accuracy, but the play of light makes it alive. Studying the effect of light on colors, and trying to create contrasts himself, the artist used green and blue tones. They allowed him to mute and increase the light of the picture.

His poplars resemble the figures of people who are frozen in anticipation. What do they expect? Perhaps the upcoming change. A hint of this is a glimpse of sunlight in the branches of the tree. It seems that it is about to peek out from behind the clouds and illuminate everything around.

maybe they are saying goodbye to close people: two more trees are depicted at a distance from them. A young poplar with a slightly bent tip and still a very small tree – they so resemble a mother and a child.

It is the play of light that creates the mood of the picture. Fluffy clouds that do not, however, bring with them haze, but only conceal a bright light. A naughty little ray that jumps along the branches of a tree, turning its foliage into gilding, plays with the spectator. A wind that easily and quickly runs through the foliage, sometimes remaining unnoticed. These half-tones were made possible by Kuindzhi’s search, his courage to try something new.

As for the composition, it is rather laconic and simple.

Combinations of such qualities make the Landscape attractive, it is full of feelings, but devoid of pretentiousness or pretense, like nature itself. After all, she is beautiful in its simplicity. And the poetic nature of the artist allows you to see the beauty in the ordinary landscape. Just as he sings, Kuindzhi treated nature, trying to paint her charms with colors.