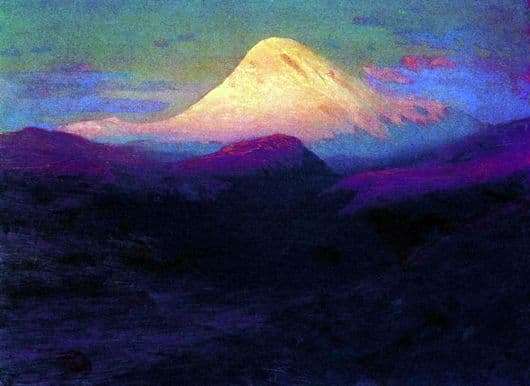 Landscapes of the famous Russian artist Arkhip Kuindzhi can immediately be guessed by a certain stylization, smoothness, isolation of the depicted images. A whole series of numerous species of the top of Elbrus is known – “Elbrus in the Day”, “Elbrus in the Evening”.

Quindzhi, like many other Impressionists, tried to depict the smallest changes in the state of air and nature at different times of the day (such as the series of Rouen Cathedral by Claude Monet). The series arose when, in 1890, Kuindzhi visited the Caucasus. He was fascinated by the mountains! And in each work he tried to use various techniques and techniques of visualization.

Although it is not an impressionistic approach that plays the main role here – the artist’s goal is to find and create an ideal, powerful image of nature connected with the whole world with the help of harmony.

The peak of Elbrus at Kuindzhi is so connected with the sky as if they are joined together. Such a sacred esoteric approach and in general the “mountain” series of masters, as it turned out in the future, greatly influenced Nicholas Roerich who had studied with him – those familiar with Roerich’s work will immediately find parallels.

Elbrus, the peak of the Caucasus, literally burns and glows, lit by the glow of the setting sun. Smooth cold shadows cover the foot of the mountain with mist. A greenish-orange sky, lilac clouds in which pale pink rays are also reflected.

The last moments the sun throws the rays on the tops of the nearby mountains and hills in the foreground, they begin to fade away slowly. We see the earth darken, but in some areas there are still reflections of the burning sky.