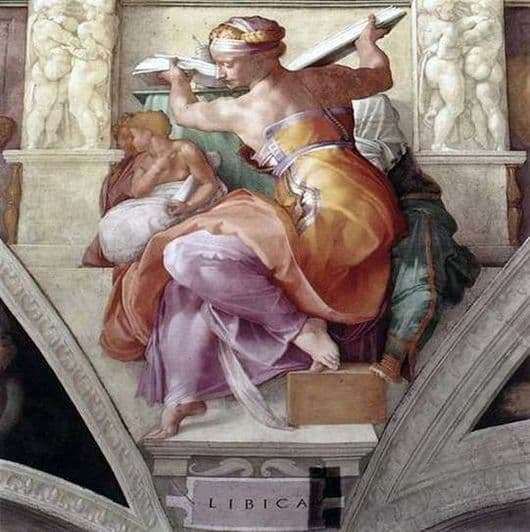 Semi-turned, with an open folio in hand, one of the five Sibyllas – the Libyan one – appears to the visitors of the famous Sistine Chapel. Like each of them, the Libyan Sibyl also carries within itself a spiritual purpose, being the embodiment of beauty, wisdom and the eternal movement of all living things and essences, indispensable, according to the Creator’s plan.

Endowed by the Italian genius Michelangelo with a special plastic and peculiar grace, despite the rather powerful forms, the Sibyl seemed to want to bring something to the modern man, turning to him with a book, where, of course, the Word of God is said. Sibyl, in the translation of “God’s will,” was originally a wandering soothsayer, who could have foreseen the fate of everyone and told her what to expect in the near future.

At the same time, the Libyan Sibyl very impatiently applied to all kinds of idols and tirelessly urged people to stop serving the pagan gods. The ancient primary sources, in which the Sibyl is mentioned, say that she got her nickname because she was from Libya, called by the Latin people Africa, and the Turks were the Barbarian. That she was rather black, of medium height, and in her hand was invariably present a branch of the olive tree.

While on the fresco by Michelangelo the Sibyl is a white woman. there is reason to believe that at that time the young Italian posed for the image of the Sibyls to the Italian master. Anyway, the side of the ceiling of the chapel is decorated with a European-type woman with golden hair.

It is located next to the prophet Daniel and is surrounded by young cherubs. As well as the other four Sibyls, the Libyan, performed by Michelangelo in 1511, perfectly fits into the grandiose ensemble of priceless works of the Sistine Chapel.