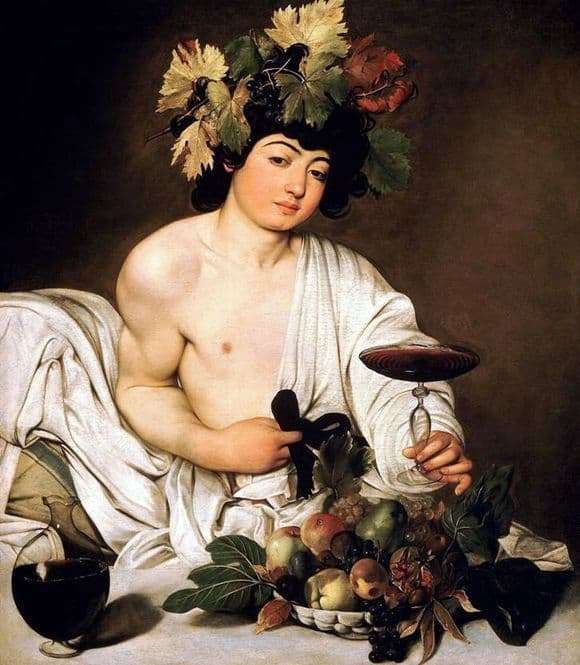 Michelangelo Merisi da Caravaggio, an Italian artist who was one of those who first began working in the picturesque Baroque style, wrote “Bacchus” in a fairly calm and serene period of his life. This can be assumed on the basis of the fact that this character Caravaggio drew earlier, but not full of strength, well done, but a sick and somewhat shabby man with a drunk face.

The picture is a portrait of a young man in the image of the Greek deity Bacchus. He is dressed, or rather, half dressed in white clothes, girded with a black belt, the end of which Bacchus holds in his right hand. With his left hand he stretches a wide glass full of wine, as if inviting the viewer to take part in a revel. On the table in front of the deity is a bowl of fruit and a big-bellied bottle of wine.

Bacchus is healthy and muscular, his cheeks radiate with a healthy blush, unburdened person. But his face is plump and kind of effeminate, in his eyes there is nothing but a half-drunk longing that is unknown to what can result – either in a fight with mythical drinking companions, or in a dream among the dining utensils. The black tar hair of a young man looks like artificial, which may be true – there are references to the use of wigs by the artist. Bacchus is sitting on a white bedspread, but it does not block the long-washed striped pillow – a symbol of some impurity.

The boy’s hand holding a glass, apparently, has not been washed for a long time, and dirt has accumulated under the nails – it looks more like the hand of some ragged man than the hand of an ancient deity. Fruits on the table for the most part are suitable only for throwing – they are crumpled, bitten, and some of them are rotten and tarnished by tracks.